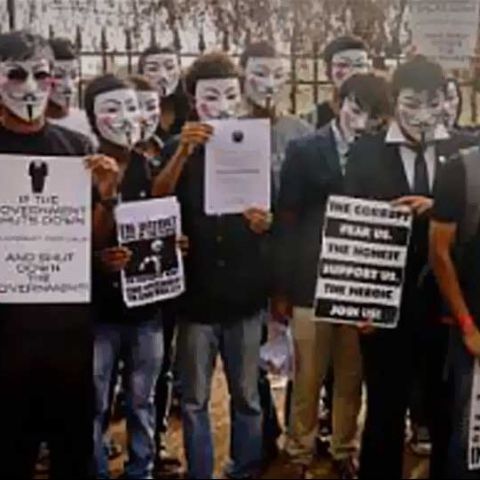 Anonymous, the global hacktivist group that has been in the news of late, organized a protest against Indian government’s website-blocking spree. This non-violent protest was organized across 11 cities all over India. We were present at Azad Maidan, Mumbai to speak to the protestors.

Initially it seemed like there were more media folk than actual protestors sporting the Guy Fawkes mask – which has come to symbolize Anonymous. Slowly the number of protestors started to increase. It was, however, a very small number of protestors – a little over a 75 approximately. Majority of the protestors were college-going youth who were distributing pamphlets and answering a lot of questions. As there is no single representative body or chapter of Anonymous, what we had was a bunch of passionate protestors.

“Till a few years back, we thought that torrents could not be blocked. But the government blocked it. Tomorrow what if they block proxy servers as well? We don’t think the government is that powerful, at least when it comes to technicalities. But by blocking sites, they are proving that they are just plain dumb. The government cannot stifle freedom of speech. We are not a dictatorship, we are a democracy where freedom of expression is a fundamental right,” was the unanimous statement given by the protestors. 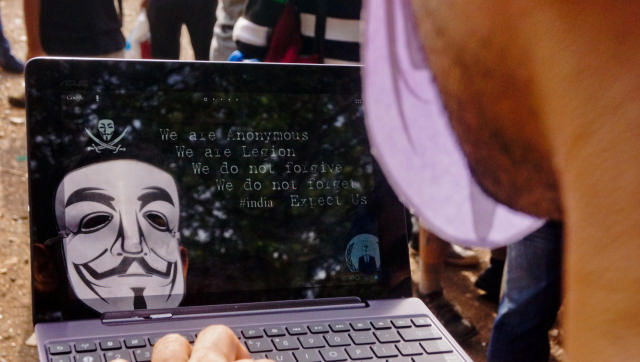 On being asked about the poor participation numbers for the protest, a group replied, “This is just the first protest. Expect us. See it takes time to build a momentum. Anna Hazare got so much support, but he has been chasing the issue of corruption for years. We will surely get more numbers in our next protest. But all we want to tell the government is – Expect Us! ” The low turnout sure wasn’t dampening the spirits of those who had assembled.
Mass movements need a constant engagement, so we asked the protestors what were their future plans. We got mixed responses from various protestors, but the underlying theme of all the responses was that this was just a beginning. “We are expecting tremendous help from the media. The whole idea of this protest is to make people aware of why we are doing this. Not a lot of people have even heard of Anonymous. We want to create awareness. With the help of Anonymous’ facebook page we plan to organize more such awareness camps or protests, till we get an assurance from the government that it will not go about arbitrarily censoring the Internet,” responded one group. On the topic of torrents, we got some interesting responses. “OK I may have downloaded a game via torrents, but if I really like I game, I just go ahead and purchase it. Moreover, if I have a music collection, which I want to share with my friend over torrents – that is the same as me giving my CD to him. I own the CD, likewise I own the music. The government can’t stop me from sharing it with my friend. That is just wrong.”
While another protestor highlighted the other side of torrents, “It is not true that torrents only help in pirating movies and music. There are tonnes of legitimate torrents as well. By putting a blanket ban on torrent sites such as Pirate Bay and Torrentz, the government is blocking legitimate torrents as well. That is just not fair!”
Earlier in the day cert.in-org, a government backed website was brought down; some days back MTNL website was defaced. On being asked if they felt that defacing government websites was the right way to go about things? “Anonymous is defacing websites, as that is the only way to get attention. Once the word spreads, more people will know about Anonymous. It will get people curious about it and ultimately help in awareness,” they agreed.
Most of the protestors were dressed in black. Some, even wearing coats in the sweltering Mumbai heat. Guy Fawkes masks were seen all around. In fact, we learned that the plastic Guy Fawkes masks were being sold at Crawford market for Rs. 180 a pop. And here’s the kicker – the guy selling these masks had absolutely no clue about why there was such a demand for these masks.
We felt that had the protest been organized at the Gateway of India or had there been a street march, there might have been a much bigger crowd around the Anonymous protestors. The absence of an organizing committee was quite apparent. But it was heartening to see a decent amount of media folk, ensuring coverage. Absence of working professionals vis-à-vis students was a cause for worry, but maybe next time such a protest will see more holistic participation.