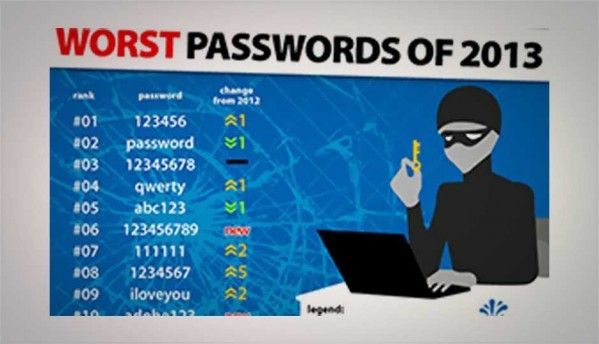 Online security firm Splash Data has released the Worst Passwords list for 2013, and the number sequence "123456" tops the list as the most common password among internet users. In the third place was the number 12345678, followed by "qwerty" and abc123.

SplashData stated that a major security breach involving Adobe software had highlighted the weak passwords among users of such Adobe products as Photoshop. Stricture Consulting Group decrypted the leaked Adobe passwords and released an estimate that almost 2 million of the more than 130 million users affected by the breach appeared to be using "123456" as a password.

Splash Data suggested that users should use a password application manager that organises and protects their passwords. Further, password should be of atleast eight characters or more and include mixed characters. The firm also suggests using passphrases with short words with spaces that are difficult to hack, but easy for the user to remember.

"As always, we hope that with more publicity about how risky it is to use weak passwords, more people will start taking simple steps to protect themselves by using stronger passwords and using different passwords for different websites," said SplashData.