Amazon is speculated to be working on its next generation of Echo devices and some leaked images of the third-gen Echo Dot have surfaced online. The images were first reported by AFTVnews and spotted by the two French publications, Numerama and FrAndroid. The images reveal that the company will be refreshing the Echo Dot in terms of design and it is being developed under the codename ‘Donut’. Notably, the first and second generation Echo Dots were assigned the codename ‘Pancake’ and ‘Biscuit’ respectively.

The leaked images tip at a more circular design on the third-generation Echo Dot as compared to its predecessor. Instead of the current gen Echo Dot that sports a bottom firing speaker, the device is said to deliver audio from the sides, which are now rounder and appear to be slightly bulging out. The smart speaker’s sides can be seen covered with a mesh-like sandstone fabric, which reminds of the Google Home Mini. Current full-sized Amazon Echo speakers are also wrapped in a similar fabric. 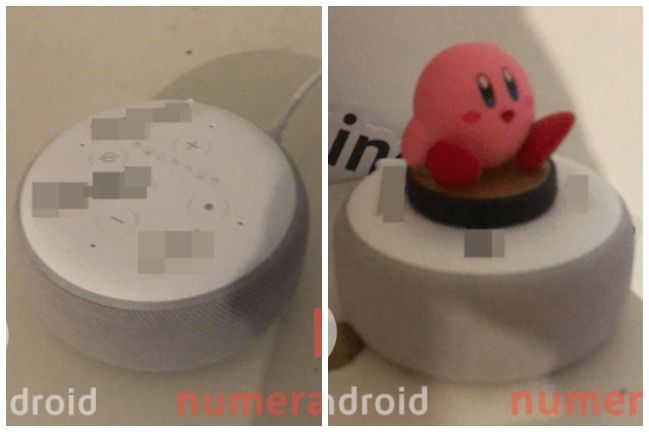 It can be seen featuring a plastic top panel, which houses the volume and mute/action buttons along with four small holes that could be the openings for the far-field microphones. The images are somewhat blurry but there might also be a fifth mic at the center of the top panel. The current gen Amazon Echo Dot is equipped with seven mics but it is speculated that the company has improved its microphone beaming technology and thus will use lesser mics on the upcoming device. The new Echo Dot is reportedly being tested by Amazon employees and is bigger than the current one as it measures 3.5 to 4 inches wide. It is said to come equipped with bigger speakers and enhanced audio quality as compared with its predecessor.

Amazon’s Echo lineup of smart speakers come integrated with the company's virtual assistant Alexa. One can control the device using voice commands and ask the smart assistant to read the news, book a cab, control other smart devices and more.