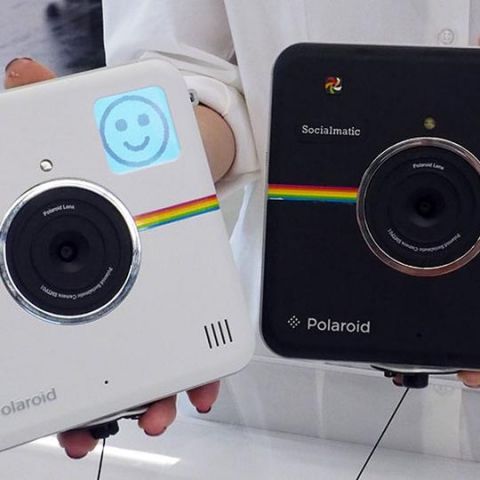 Polaroid has rolled out a new Socialmatic camera that prints mini photos and allows users to upload photos to their social accounts instantly. The Socialmatic camera is now available for pre-order and will start shipping in January.

Polaroid introduced the camera at the Consumer Electronics Show in January earlier this year. It has a 4.5 inch touch screen where users can edit the images and share them with their followers on social media sites. The camera comes with a built-in Wi-Fi and Bluetooth connectivity that allows users to send images to their phone or tablet. The Socialmatic camera has a 14 MP front camera and a 2 MP rear camera for selfies. It comes with 4 GB of inbuilt storage. The camera looks like a three-dimensional Instagram icon and comes in black and white colors.

The Polaroid camera is powered by Android, so users can access emails, apps as well as access the internet browser with ease. It has a unique QR code to track the images and is GPS-enabled. The prints are two inches by three inches and have an adhesive back. The Polaroid Socialmatic camera costs $299.99 with enough paper and ink for 10 prints, and $350 for 110 prints.

The Socialmatic concept was developed by a designer named Antonio de Rosa with marketing and communication firm ADR Studio in 2012. However the designer failed to get funding through an Indiegogo campaign and entered in a "long and difficult negotiation" with Polaroid to get the product off the ground.