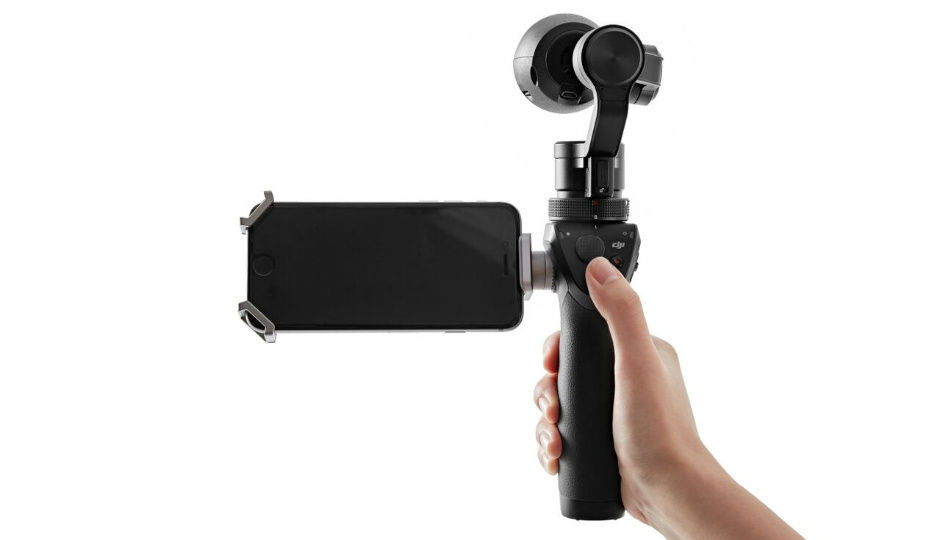 DJI has announced the launch of Osmo. Osmo is an integrated camera and handheld stabiliser that makes user of DJI’s three-axis gimbal stabilisation technology. It removes the shake of traditional handheld devices and helps create cinematic shots. DJI will be entering the Indian market on October 15 and its official price for the Osmo in India is still unknown. Osmo is available for pre-order at $649, which is about Rs. 42,000 by direct conversion.

The Osmo handle is also available separately without a camera. It comes in a modular format that makes it fully compatible with DJI’s Zenmuse camera series. It has a 12MP camera, a 1/2.3” sensor with a 94 degree field of view and can record 4K videos. Intelligent controls are built into the handles. These help make the transition between shooting angles, capturing photos, or recording videos simpler. Osmo handle also comes equipped with an on-board stereo microphone along with a 3.5mm audio jack for recording professional-quality sound. It also comes with a universal mount that works together with a smartphone holder as well as additional optional accessories like a tripod, bike mount, and an extension arm.

Users can also view live images of what the camera captures and adjust camera settings as required and also control filming functions. The functions of the  camera include Panorama, Long Exposure and Slow Motion. In the Panorama mode, the camera automatically pans around 360 degrees and stitches together overlapping photos. Long Exposure makes use of Osmo’s stabilisation technology to reduce shakes. Slow Motion captures shots at 120 frames per second at up to 1080p.

Last year, DJI had launched a drone called the Inspire 1 at a price of $2,800. It has a transforming design as it can lift its carbon fiber arms after lift-off so that the user gets an unobstructed 360 degree view. The Inspire 1 comes with a 12MP camera and a 9 element lens that is capable of shooting 4K videos at 30fps. The camera also has a 94 degree wide-angle view and is mounted on an auto-leveling gimbal for stability.