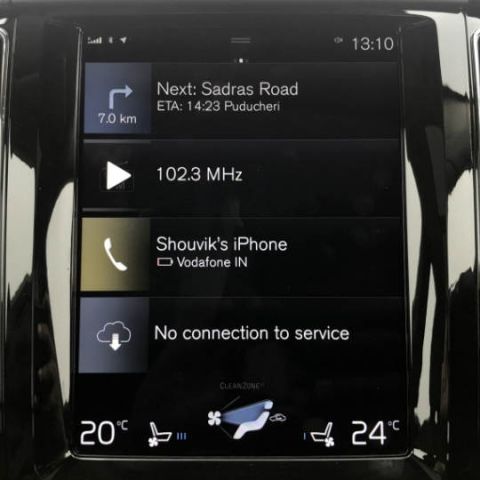 Announced at Google I/O, Volvo and Audi are the first two car makers who will be integrating Android OS directly into the car's head units, thereby giving a near-smartphone experience.

Volvo Cars has officially inaugurated its plans for integrating Android into its Sensus infotainment system. We had reported much previously, when the Swedish car maker had signed an agreement with Google and fellow car maker Audi to integrate Android OS into its car system. More recently, reports supported by Google's Android Developers Blog pointed at the Google Play Store being imminent for launch in dedicated car systems, and at Google I/O 2018, the companies have introduced the future of Android in cars with a demonstration of the system in the new generation Volvo XC40.

With the new system, Volvo is essentially converting its already-fantastic and critically acclaimed tablet-like infotainment system into an Android tablet/smartphone. With connected cars ecosystems growing steadily, Volvo's cars in the near future will include inbuilt connectivity, with Android powering its connected car and vehicle-to-vehicle communications. The new system works independently of smartphones, and just like an Android device, you can simply log in to the system with your Google account. The features, though, include much more than just media settings - since this is an exhaustive car ecosystem, you can actually store and synchronise all your memory settings to your Google account logged into the system. For instance, every user account in the new Android-powered system saves settings for the memory seats, steering wheel and mirror positioning, which was previously taken care of by custom driver profiles.

While that remains the same, what you will majorly benefit from in this system is that once you log in, you also get access to all your saved preferences via the Google account, including saved locations, calendar entries, speed dial contacts and more. This essentially helps in a more seamless usage scenario, with integrated Google Maps in the system itself. The new system also gets its own optimised Play Store and the Google Assistant, which powers all the voice actions. The system is also open to third party developers, who can also build car-specific apps with minimal driver distraction and novel features in mind. Every option, from app interfaces and shortcut buttons can be custom-built, just like in any Android ecosystem. This makes the system far more versatile, and can offer a wider range of native apps for the system. It will also help in easier synchronisation of vehicle-to-vehicle connectivity, which will form a crucial part of the automotive framework in the near future.

The Volvo Sensus interface is being retained as a custom skin built on top of the Android platform, which is great seeing that it is already quite good. The Android-based system premieres in a couple of years, when it will start appearing in production models. For a full demo of the new system, see the video embedded below: