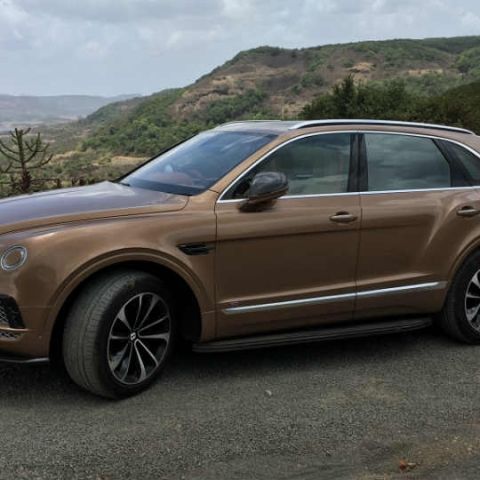 Bentley, the maker of uber-luxurious vixens and brutes, have now come up with an eco-friendly alter ego of its big, bad brute - the Bentayga. Arguably the most popular car of late from the British company's stable, the Bentayga was till now powered by a rather monstrous W12 gasoline engine that produces a staggering 608 brake horsepower. Now, it gets a smaller combustion engine complemented by a 136hp electric motor.

The 2018 Bentley Bentayga hybrid is powered by a 2.9-litre V6 engine, which when combined with the aforementioned electric motor produces a total of 462bhp. While a few purists may frown at the diminished power figure, Bentley is certain to have slotted in a few fancy optimisations to the powertrain, which would help the massive, heavy SUV maintain its performance despite the toned down power figures. The W12-powered Bentayga produced 608bhp and 815Nm of torque - freakish power figures in its standalone right. However, coupled with the weight of the car, it still managed to produce commendable agility and straight line speed. The hybrid trim will aim to do just that, while adding a green badge to the upscale statement-maker.

Everything else in terms of the technology and luxury packages are expected to remain the same - which we already found incredibly commendable in our drive. It is not yet clear if Bentley would bring the hybrid trim to India, with heavier taxes imposed on an already tax-heavy luxury CBU segment. But, seeing that Bentley buyers wouldn't exactly be too obsessed with a few extra bucks, and the Indian government pushing for greenification of cars, we expect to see it here sooner than later.