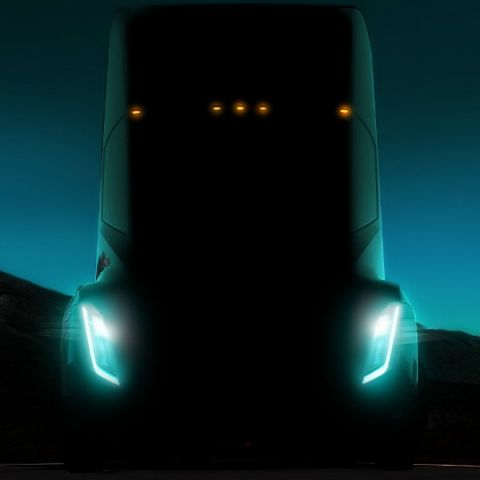 The semi truck would need a fair bit of technological wizardry to get reasonable mileage out of batteries, and Tesla will certainly have a trick or two up its sleeve for that.

Tesla's mercurial CEO Elon Musk has a surprise almost every time he takes to the stage, and at the recent TED Talk, things were no different. Word surrounding a possible electric semi truck from Tesla was around for a while, and what Musk shared is seemingly a teaser for the same. The Tesla electric semi truck is certainly some time further into the future, and more details about the electric commercial vehicle can be expected no sooner than the last quarter of 2017. Nevertheless, the teaser image is pretty much what you would expect from Tesla.

The Tesla electric semi truck has a tall facade with LED headlamps that look narrow and long, instead of being wide slits that Tesla has used in its cars so far - the Model S, Model X and Model 3, so far. The corner panels of the front facade also look expectedly rounded and sleek, something that Tesla has typically presented in each of its cars so far. Alongside contributing to aesthetics, the typical design has engineering benefits for Tesla, and allows the company to make the most of its battery power by reducing drag coefficient and increasing aerodynamic efficiency.

Using such designing will be even more important for an electric truck, because of the heavy load that its battery will face. The company will have its task cut out to provide efficient driving range out of the equipped batteries, and it will be interesting to see the technological innovations that Tesla undertakes on it. Possible launch for this mean machine is still a few months away, and we expect to see more activity from Tesla in the meantime, including a possible entry to the Indian market.