Tesla Cybertruck pre-orders cross 2,50,000 within a week after unveiling 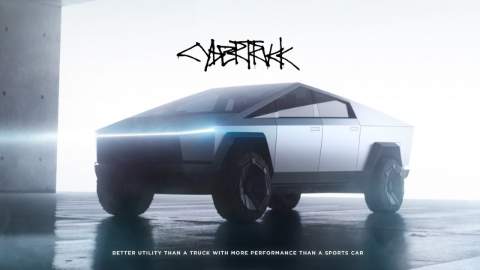 It will be available in late 2021 in three variants

The Cybertruck is arguably Tesla’s maddest EV yet, in terms of how it looks and what it can do. Tesla CEO Elon Musk unveiled the Cybertruck at an event in Los Angeles, California late last week with a great deal of enthusiasm. And while some of that enthusiasm may have been blunted by the Tesla Armor Glass mishap, the Cybertruck has managed to get away with some impressive initial sales numbers. According to a recent tweet by Musk, the Cybertruck has received over 2,50,000 pre-orders online.

Since its global unveiling on November 22, the Tesla Cybertruck has been available for pre-order in selected regions across the globe, including Canada, Australia, France, Hong Kong, the UK, and the US. In its home country of the US, the Cybertruck can be bought in three different variants starting at $39,900 (Rs 28.61 lakh approx). Interested customers will have to put down a fully refundable sum of $100 (Rs 7,130 approx) to place their order. Deliveries of the Tesla Cybertruck will start in late 2021.

According to Musk’s tweets, pre-orders for the Tesla Cybertruck crossed 1,46,000 just a couple of days after its unveiling, with 42 per cent of the customers going for the dual-motor variant, 41 per cent choosing the tri-motor variant, and 17 per cent picking the single-motor variant. Musk later said in his tweet that that number was achieved with zero advertising and absolutely no paid endorsements. By Monday, pre-orders for the electric pickup truck crossed 1,87,000. And as of two hours ago, the Cybertruck has over 2,50,000 pre-orders.

According to Tesla, the top-end variant of the Cybertruck with triple motors can tow up to 6 tonnes of weight. The company recently demonstrated the EV’s maximum torque in a Twitter video in which the Cybertruck is seen pulling a high-revving Ford F-150 uphill. The triple-motor variant comes with a total range of 800 kilometres and can do 0-100 kilometres per hour in under 2.9 seconds. Tesla is selling all three variants with an optional self-driving package for $7000 (Rs 5 lakh approx). You can read more about the Tesla Cybertruck’s unveiling here.