It has a claimed driving range of 300 kilometres

Pre-orders for it will start from today

After weeks of posting previews and teaser videos on its social media channels, Tata Motors has officially taken the wraps off the Nexon EV, its all-electric subcompact SUV based on the outgoing Tata Nexon. According to the Indian automaker, the Nexon EV delivers a claimed driving range of over 300 kilometres on a single charge. Available in three variants and three colour options, the Nexon EV can be pre-booked starting today for an amount of Rs 21,000 although the car will be launched officially in January 2020. The Tata Nexon EV is expected to be priced at around Rs 15 lakh.

The Nexon EV is the first in Tata Motors’ stable to use the company’s proprietary Ziptron EV powertrain. First announced in September, Ziptron will find its way to future Tata EVs such as the electric version of the upcoming Altroz hatchback. The Nexon EV is equipped with a 30.2kWh lithium-ion battery, which Tata says is good for up to 300 kilometres on a single charge. It can regain 80 per cent of its full charge within an hour when the car is plugged into a Fast DC charger. It can also be charged using a 15-amp domestic power socket. 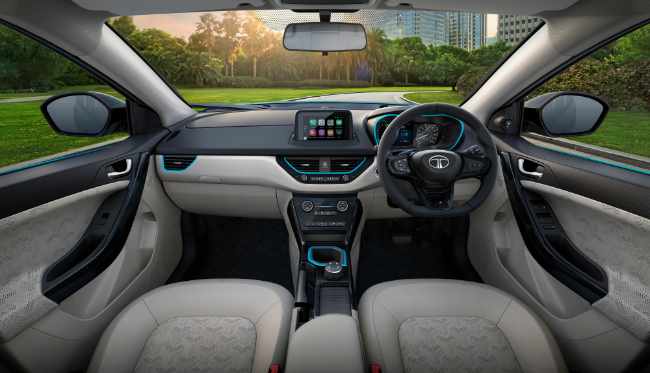 The Nexon EV’s permanent-magnet AC motor pushes out 129 horsepower (and 245 Nm of torque), which Tata believes can push the car from 0 to 100 kilometres per hour in 9.9 seconds. The car allows the driver to choose from two driving modes, namely Drive and Sport. In addition, it features Hill Assist and Descent Assist to make sloped terrains easier to tackle. Of course, there’s also regenerative braking on board, which charges the battery when the car is either coasting or braking. The high-density liquid-cooled battery pack is IP67-rated for dust- and water-resistance. Lastly, the Nexon EV’s battery and motor come with an eight-year warranty.

The Nexon EV is available in three variants, namely XZ+ LUX, XZ+, and XM, where the first two feature dual-tone colours. Colour options include Signature Teal Blue colour, Moonlit Silver and Glacier White. On the inside, the Nexon EV sports a 7-inch touchscreen display from Harman for infotainment with native support for Android Auto and Apple CarPlay. In addition, the Nexon EV can be controlled remotely using the owner’s Android/iOS smartphone with the proprietary ZConnect app. It will also help the owner locate nearby charging stations, set speed alerts, track the vehicle, etc.