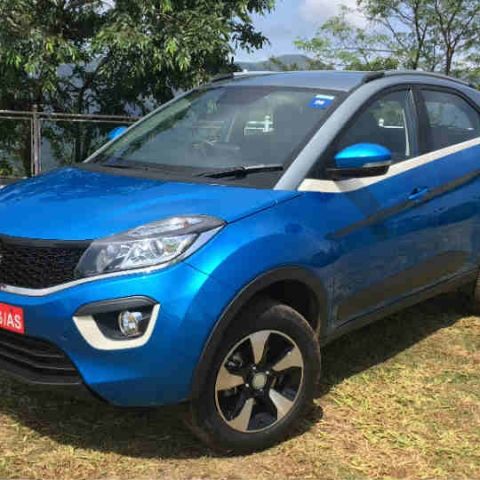 The Tata Nexon is very well priced for what it offers, and will go up against the likes of Maruti Vitara Brezza and Ford Ecosport in India.

The Tata Nexon has been finally launched in India, right ahead of the festive season. The compact SUV from Tata Motors has been launched with introductory pricing that sees the base variant begin from Rs. 5,85,000. The Nexon gets a total of 10 trims – XE, XM, XT, XZ+ and XZ+ with Dual Tone Roof, split between the petrol and diesel engines.

The Tata Nexon’s biggest new feature is the all new infotainment system, which has been upgraded from the previous, tiny and low resolution ConnectNext system. The new infotainment system has a new interface, offers a 6.5-inch display with screen resolution of 800x480 pixels and 140ppi pixel density, and includes a host of new features including Android Auto and Apple CarPlay. The ConnectNext suite of apps have also been retained, and will finally be introduced for iOS devices as well.

Other key new elements include the new engines – a 1.2-litre Revotron turbocharged petrol engine that produces 108bhp of power and 170Nm of torque. It is also paired with a new, six-speed manual transmission that has reworked the gear ratios to make them shorter and in turn made the car more nimble-footed. The other engine is a 1.5-litre Revotorq turbocharged diesel engine that somehow produces the same amount of power and 260Nm of torque. Both the engine variants get three drive modes – Eco, City and Sport, although it is the Sport mode that you would mostly enjoy driving in from what we found in our pre-launch review.

The Tata Nexon also includes two airbags as standard across all variants, a total of 31 storage spaces inside the cabin including a sliding tambour door on the front central console that looks similar to what Jaguar provides in its luxury sedans, umbrella holders, and even a cooled and illuminated glovebox. The car also gets eight Harman-powered speakers which sound fairly competent for its class, and the SUV provides 350 litres of boot space with all seats up.

The Tata Nexon introductory prices are as follows:

Read our first drive technology and drive review of the Tata Nexon here to know every detail of the incredibly well-priced and well-equipped Tata Nexon, in detail.