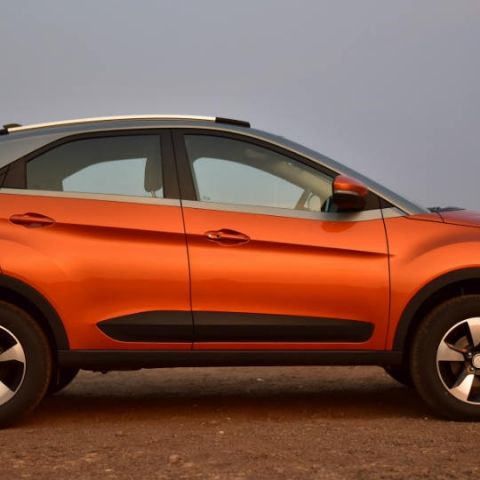 The Tata Nexon AMT also gets a new body and roof colour combination, and the wearable wristband key has finally been introduced.

Tata Motors has introduced the Nexon AMT in India, with both petrol and diesel engines getting the automated manual transmission gearbox, which Tata calls HyprDrive Self-Shift Gears (S-SG). The two trims are priced at Rs. 9,41,000 with the petrol engine, while the diesel-powered SUV is priced at Rs. 10,30,000. Power figures for the engine remain the same, with the 1.2-litre Revotron engine producing 109bhp and 170Nm torque, and the 1.5-litre Revotorq producing 109bhp and 260Nm torque.

The AMT gearbox in the Nexon has been expected for a while now, and was stated to be in the works back when it was launched. To streamline the performance of the AMT gearbox, Tata has included features like anti-stall, fast launch and kick-down. Furthermore, it gets crawl and smart hill climb assist to help manoeuvre city traffic and steep slopes. Back when the Nexon was launched, Tata had also showed a prototype wearable key that looked like a fitness band, which has now been launched. The rest of the features remain the same, including the 6.5-inch ConnectNext infotainment system with Android Auto, and an 8-speaker Harman/Kardon audio setup.

The Tata Nexon AMT also gets a new colour variant - Etna Orange for the body, with Sonic Silver dual-tone roof finish. In tune with online car configurators offered by luxury car makers, Tata Motors has also launched its new customisation platform - Imaginator, where potential buyers can choose colour schemes and equipment levels to pre-customise their choices. The Tata Nexon was a pleasant car to drive back during launch, and with the introduction of the AMT gearbox, may appeal to more customers who are on the lookout for a competitively priced, automatic SUV with both diesel and petrol options.