Audi's MMI is about to get a new backbone, and it's made by Samsung. 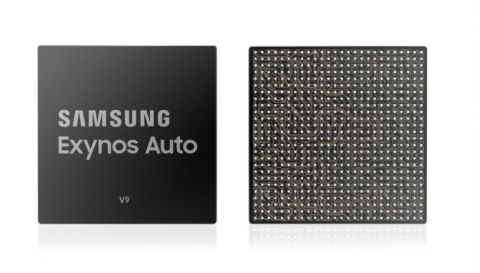 Samsung has just introduced its first auto-branded processor. The first of these chips will find their way to Audi's next-generation in-vehicle infotainment system, which is expected to debut in the market by 2021. According to a press release by the Korean electronics manufacturer, Exynos V9 is a powerful automotive processor designed specifically for advanced in-vehicle infotainment systems that display content on multiple displays.

Samsung's new Exynos V9 is based on an 8nm process and uses eight of ARM's latest Cortex-A76 CPU cores. It also incorporates an ARM Mali G76 GPU, premium HiFi 4 audio DSP, and a neural processing unit. "Samsung has been a valued technology partner over the past few years and we are extremely pleased to have the Exynos Auto V9 power our next-generation platform that will shape the future in-vehicle infotainment experiences," commented Alfons Pfaller, Head of Architecture Platform Development E/E at Audi.

Backed by LPDDR4 and LPDDR5 DRAM, Samsung's Exynos V9 contains a safety island core that supports Automotive Safety Integrity Level (ASIL)-B standards. This allows real-time protection for system operations. The neural processing unit inside processes visual and audio data for features like face, speech, or gesture recognition. This means the vehicle's infotainment system could potentially get smartphone-like features. For example, waving the hand in front of the display could prompt it to perform a pre-defined function.

"We are thrilled to introduce the new Exynos Auto line of products, starting with the Exynos Auto V9, which brings powerful processing performance to the next generation of automotive in-vehicle infotainment systems while meeting the industry’s strict reliability requirements," commented Kenny Han, Vice President of Device Solutions Division at Samsung Electronics. Samsung's Exynos V9 is capable of supporting up to six displays and twelve camera connections. This means a car could have  multiple cameras all around and displays in the centre console, instrument cluster, and on seat backs for rear-seat entertainment. We'll just have to see what Audi comes up with using Samsung's new processor.