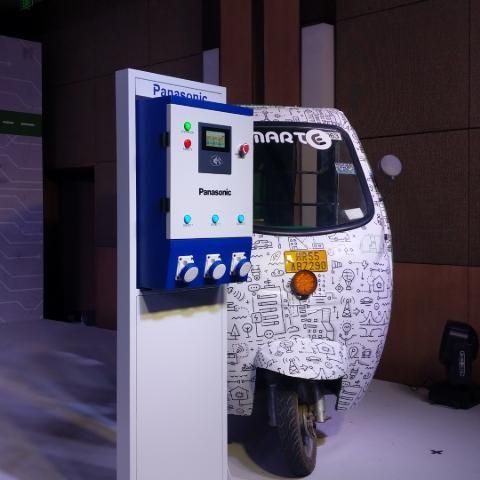 Panasonic, which is currently in the first phase of its new electric mobility initiative, has partnered with two Indian electric mobility service providers to deploy its solution. The two providers are SmartE and qQuick, both of which are based in the NCR. While SmartE deals with electric three-wheel rickshaws, qQuick manufactures electric scooters. Up to 150 SmartE units and 25 qQuick scooters will benefit from Panasonic’s new charging solution.

“Conceptualized and developed in-house, our charging service is currently meant for two and three wheelers, but we aim to expand that in the near future to other vehicles. We have currently deployed our solutions in Delhi NCR and aim to expand the offerings to Bangalore, Pune, Hyderabad, Chennai and Amaravati in the next three years and 25 more cities in the next five years (catering to) targeting approximately 1 million vehicles,” commented Atul Arya, Head of Energy Systems Division at Panasonic India in a press release.

SmartE’s electric rickshaw can seat up to four passengers plus a driver and be used for drives shorter than 5 kilometres. The rickshaws currently number 600 in total in India. qQuick’s electric scooter, on the other hand, is unlocked and authenticated using a proprietary smartphone app and can be ridden for up to 50 kilometres on a single charge. One should be able to see Panasonic’s new charging solution in parts of the NCR sometime in the near future.