The Tesla Model X electric SUV has arrived unofficially in India. An unknown person has privately imported the automobile at the Mumbai docks. 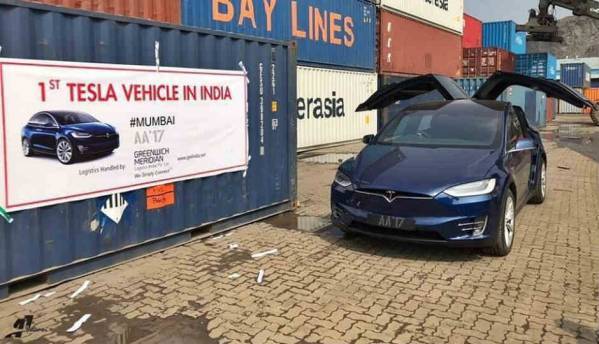 The first Tesla vehicle has arrived in India, unofficially. While the company is yet to make its way to the country, an unknown person has privately imported the automobile. As per the images posted by Automobili Ardent : Petrolhead Lifestyle Facebook page, a Tesla Model X was shipped to India, landing at the Mumbai docks recently.

While the vehicle in question is the Tesla Model X, the company had targeted newer markets like India, Brazil and South Korea with the Model 3. However, the company has not yet announced plans to bring the Model X to the country. The Model X is manufactured at the company’s Fremont facility in the US and is a fully electric SUV, which can go from 0-100 kmph in 2.9 seconds.

The Tesla Model X can receive over the air software updates and comes with a touchscreen system for navigation. The car sports a built-in autopilot system, though one would expect that to be a dangerous technology for India right now. Tesla itself agrees that the technology is yet to be finished completely.

Furthermore, Tesla’s Supercharger stations aren’t set up in the country yet, meaning the buyer of the Tesla Model X will have troubles charging his vehicle. The company though, had spoken about the possibility of setting up a Gigafactory here in India. Currently, Indian Model 3 buyers are expected to get their vehicles sometime in 2019.