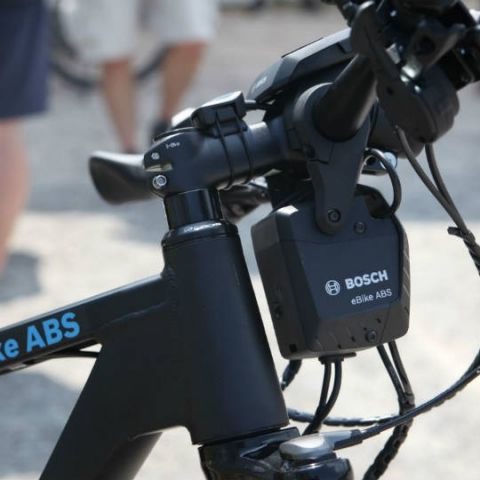 Already a standard in cars and available in even some motorbikes, ABS can potentially make bicycles much safer in future.

Bosch wants to make the road safer for bicyclists by improving the brakes. The company has developed a new anti-lock braking system (ABS) for bicycles, which is meant to strike a finer balance between the front and rear brakes, in turn ensuring that you don't topple over in case of sudden, emergency braking.

What the antilock braking system essentially does is to pulse the brakes so that the tires do not skid when you brake, thereby breaking the inertia that leads to falls and crashes. It also shortens the braking distance and maintains stability, thereby making the vehicle more stable on overall terms. Bosch retrofits bicycles with front and rear disc brakes with onboard sensors to gauge wheel rotation speed. The microcontroller for the entire unit is nestled to the front underneath the handlebar, and algorithms collate data from the sensors to ensure that there is minimum wheel spin while braking and prevent the front wheel from locking. It essentially synchronises the motion and the powered components also ensure that braking distance is shortened, thereby protecting the obstacle (a puppy, maybe) and the rider.

Unfortunately, the technology can only be implemented in e-bicycles for the time being, since it needs active power to operate. Bosch is rolling out the technology in shared e-bicycle fleets at the start and then will assume rolling it out to more commonplace markets in the future. As of now, while this can be one of the biggest an most important safety technology to reach out to bicycles in quite some time, it will not have groundbreaking impact until it reallly hits the mainstream sections of the industry.