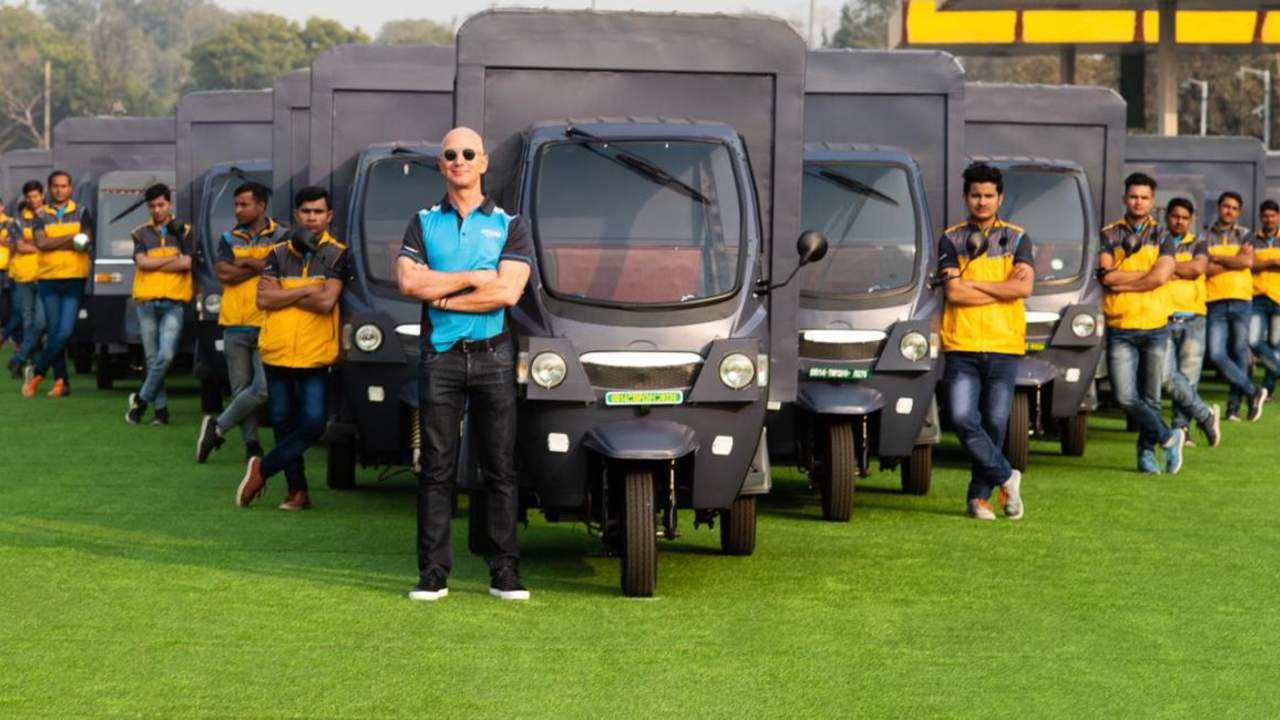 It consists of electric vehicles, which are expected to number 10,000 by 2025

Erratum: This story has been updated to reflect the correct number of EVs Amazon India estimates to deploy in its fleet by 2025. We apologise for the error in the original story.

In what appears to be one of the many first significant steps the popular e-commerce company is taking as part of the Climate Pledge initiative to reduce global carbon footprint, Amazon India has announced a new fleet of electric delivery vehicles. Amazon CEO Jeff Bezos was seen proudly presenting the company’s new delivery fleet on Twitter yesterday, which currently consists of electric rickshaws designed and manufactured in India. Amazon India intends to add as many as 10,000 three-wheel and four-wheel electric vehicles (EVs) to its delivery fleet by 2025, while globally it intends to have as many as 1 lakh EVs in its fleet by 2030.

With the aim of reducing carbon emissions on the road, Amazon India will deploy its new fleet of electric rickshaws for order deliveries this year in over 20 cities across the country, including Delhi NCR, Bengaluru, Hyderabad, Ahmedabad, Pune, Coimbatore, and Nagpur. In its blog post, Amazon India notes that it successfully carried out the same EV-powered delivery effort as a pilot project across several Indian cities last year. Amazon India is currently working with many Indian EV manufacturers to increase its fleet count to 10,000 units.

“The expansion of our Electric Vehicle fleet to 10,000 vehicles by 2025 is an integral milestone in our journey to become an energy efficient leader in the industry. We will continue to invest in the electrification of our delivery fleet, thereby reducing our dependence on non-renewable resources,” commented Akhil Saxena, Vice President of Customer Fulfillment at Amazon APAC & Emerging Markets. According to Amazon India,  the National Automotive Board’s FAME 2 (Faster Adoption and Manufacturing of Electric Vehicles 2) scheme has helped accelerate this process.

Amazon’s commitment to use EVs for deliveries in India is part of the Climate Pledge initiative from last year. In September 2019, Amazon committed to switch to 100-per cent renewable energy in all its operations by 2030 and be net zero carbon by 2040. It said it would reach the 2050 target set by the Paris Agreement a whole decade early. In addition, the company agreed to invest $100 million in reforestation projects around the globe. Flipkart, Amazon India’s most direct competitor in the e-commerce space, also announced a sustainable last-mile delivery solution last year.