With increasing implementation of augmented reality in everyday lives being made for more intuitive interactions, Air New Zealand has come up with an idea to use Microsoft's augmented reality headset, HoloLens, to present its customers with better flying experience. The plans are still in beta, but Air New Zealand is positive about such implementation to present more personalised and interactive in-flight services.

Domestic flying (and sometimes international, too) can be more of a hassle nowadays, with increased security steps and large queues. Adding to that are competing airfares leading to compromised in-flight services in exchange for cheaper fares. All of this can often make flying a harrowing experience for many, which is exactly what Air New Zealand aims to address by using augmented reality. The cabin crew in Air New Zealand flights will each be provided with a Microsoft HoloLens headset. Passenger data will be automatically entered into a local database in the flight, which helps streamline operations as the local database significantly narrows down the number of entries that algorithms will need to evaluate before finding the correct match. This also makes the technology more precise, which will make use of facial and speech recognition to identify a seated passenger. 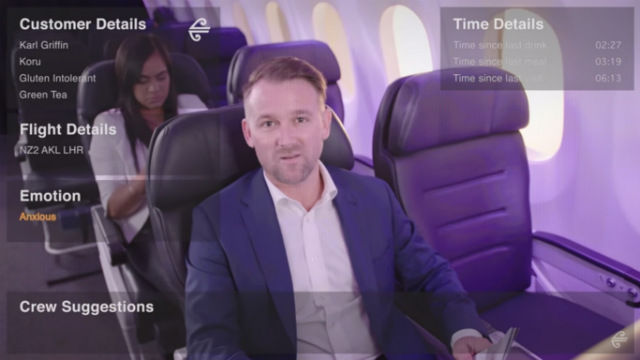 The same technologies will also be used to identify moods, and depending on the outcome, the HoloLens interface seems to suggest actions that a flight attendant may provide to a passenger to assist him/her. Other information provided by the HoloLens interface include time since last drink, distance and time to destination and more, which will help attendants offer prompt, personalised and interactive services. While the approach is certainly a positive step forward to making flying a better experience than what it is right now, it remains to be seen how practical it is, in the long run.

Even with all the latest redesigns, wearing a Microsoft HoloLens for extensive hours can be a painful affair, as we have seen with a large number of similar headsets. A demonstration video published by Air New Zealand also shows a flight steward practicing the 'air tap' information input method, which would certainly look a bit awkward in a flight cabin.