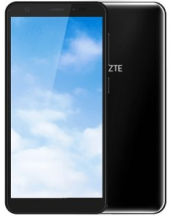 ZTE has launched a new budget smartphone, called the Blade A5 2019. The affordable device comes with an 18:9 aspect ratio display, an 8MP selfie shooter and octa-core processor. The phone is meant for budget consumers and has entry level specifications.

ZTE Blade A5 2019 smartphone has a 5.45-inch touchscreen display with 720 x 1440 pixels resolution and an aspect ratio of 18:9. The device features a plastic fitted single

camera module, and doesn’t come with a fingerprint scanner. The device features bezels on the bottom and top side of the phone. The phone measures 146.30 x 70.60 x 9.55mm and weighs 157.00 grams. It is available in Black and Blue colours.

The phone packs a 13MP camera with an f/2.0 aperture and an 8MP camera on the front for selfies, with an f/2.4 aperture. The phone’s camera app supports features like HDR and panorama support. The phone can click decent pictures even in low light conditions.

ZTE Blade A5 2019 is powered by an octa-core Spreadtrum SC9863A processor paired with 2GB of RAM. It runs on Google’s Android Pie OS out of the box. The phone runs MiFavor 9.0 based on Android Pie.

The phone comes with a microUSB connector and has a 3.5mm audio jack. Connectivity options included in the phone are Wi-Fi, GPS, and Micro-USB. The dual-SIM smartphone accepts Nano-SIM and Nano-SIM cards. The device is able to handle most tasks with ease. It comes with an Accelerometer, and proximity sensor. The phone doesn’t have a fingerprint scanner, and ZTE hasn’t confirmed that Face Unlock is present.

The phone is powered by a 2,600mAh non removable battery. It packs 16GB of inbuilt storage that is expandable via a microSD card slot up to 256GB.  The phone has ample space for all your videos, movies, etc.