The Redmi 5 is definitely one of the more powerful and power-efficient offerings in the budget segment but the novelty of the phone is marred by Xiaomi itself thanks to the more powerful Redmi Note 5 at around the same price. The base variant of the phone isn’t powerful enough to match the requirements of an average power user while the top variant is only Rs 1,000 less than the top variant of the Redmi Note 5. Independently, the Redmi 5 is a decent offering that seals Xiaomi’s grasp of the low-end smartphone segment. The company hopes to cushion itself with the Redmi 5 should the Redmi Note 5 be passed over for the more powerful Redmi Note 5 Pro. It also makes for more choices for the consumer, together with more confusion of course. The biggest deterrent to buying Xiaomi devices has been its flash-sale model, but Redmi 5 will be on an open sale on Amazon, putting that concern to rest. 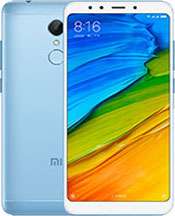 Redmi 5 4GB was launched in March 2018 & runs on Android 7.1 OS. The Smartphone is available in more than three color options i.e.Black, Gold, Lake Blue, Rose Gold & has a built in fingerprint sensor as the primary security feature, along with the host of connectivity options in terms of 3G, 4G, GPS, Wifi Bluetooth capabilities. The phone is available with 32 GB of internal storage.

A 4 GB of RAM ensures phone runs smoothly even the most memory intensive applications & still shows no signs of lag. 32 GB of internal storage can be expanded to 128 GB via a microSD card.

The Phone comes with a large 3300 mAh battery to support it's 5.7 inch screen with IPS LCD display having a resolution of 720 x 1440 at 282 ppi. The screen is also protected by a Corning Gorilla Glass.

Redmi will launch its flagship K40 series phones in China today. Likely to be populated by the K40 and K40 Pro, the flagship series will be unveiled at a launch event in China which will...

Xiaomi Redmi Note 10 series is set to launch on March 4 in India and ahead of its launch, the company has confirmed that the lineup will be powered by Qualcomm’s mid-premium Snapdragon processors. Xiaomi...

Asus ROG Phone 5 is now confirmed to launch on March 10 in India. The much-awaited gaming smartphone will launch globally at the same time as India. Asus has also confirmed that the phone will...