While Sony has focussed all its energies towards the flashier Xperia Z, they could have had gem on their hands with the Xperia SP. It surprised us with the sophistication of its build, and its rather capable hardware. Despite that, its pricing is still too close to more desirable and powerful phones. Wrong pricing will probably be the downfall of what is otherwise a very capable phone. 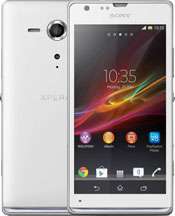 Sony Xperia SP was launched in April 2014 & runs on Android 4.1 OS. The Smartphone is available only in one color i.e. default & provides a host of connectivity options in terms of 3G, GPS capabilities. The phone is available with 8 GB of internal storage.

The Smartphone is powered by 1.7 Ghz Dual core Qualcomm Snapdragon S4 Processor. A 1 GB of RAM ensures phone runs smoothly even the most memory intensive applications & still shows no signs of

lag. 8 GB of internal storage can be expanded to 32 GB via a microSD card.

The Phone comes with a 2370 mAh battery to support it's 4.6 inch screen with TFT LCD Capacitive touchscreen display having a resolution of 720 x 1280 at 319 ppi.

Sony Xperia SP Price In India Starts From Rs.11000 The best price of Sony Xperia SP is Rs.11000 on Flipkart.This Mobile Phones is expected to be available in 8GB variant(s).