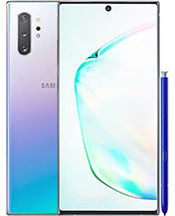 Samsung has announced its flagship Galaxy Note10 Plus 5G smartphone. It has a 6.3-inch dynamic AMOLED display with a 90.9% screen-to-body ratio. The Samsung Galaxy Note 10 Plus 5G is a flagship smartphone and comes with a water-resistant body, along with the wireless charging and quick charging features. The phone runs on Android 9.0 (Pie) upgradeable to Android 10.0. The smartphone runs on Exynos 9825 octa-core (2x2.73 GHz Mongoose M4 & 2x2.4 GHz Cortex-A75 & 4x1.9 GHz Cortex-A55) processor. The device has a triple rear camera setup and a 10 MP front camera for clicking selfies.

The phone has a 6.3 inches Dynamic AMOLED capacitive touchscreen with 16M colours. The phone has a 90.9% screen-to-body ratio and comes with Corning Gorilla Glass 6 for added protection. It has an IP68 dust/water-resistant body and can sustain underwater up to 1.5m for 30 mins. The device has 1080 x 2280 pixels display resolution and a 401 ppi density. The device is available in Aura Glow, Aura White, Aura Black, Aura Pink, and Aura Red colours. The smartphone has 151 x 71.8 x 7.9 mm dimensions and weighs 168 grams.

It has a Fingerprint (under display, ultrasonic) sensor, accelerometer, gyroscope, proximity, compass, and barometer sensors.

The Samsung Galaxy Note 10 Plus 5G features a 12 MP primary camera with a variable-aperture (f/1.5-2.4) lens, a secondary 16 MP ultra-wide-angle sensor, a third 12 MP telephoto camera, and a fourth VGA 'DepthVision' sensor. For clicking selfies, it has a 10 MP camera with an f/2.2 aperture. The Samsung flagship has features like LED flash, auto-HDR, and panorama shot.

The smartphone is powered by Samsung’s Exynos 9825 (7 nm) octa-core processor and runs on Android 9.0 upgradeable to Android 10.0. The phone is available in a single configuration with 256 GB of internal storage.