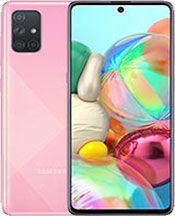 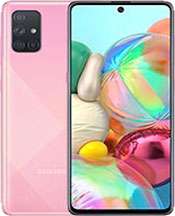 The Samsung Galaxy A71 and the Samsung Galaxy A51 smartphones were recently unveiled by the South Korean giant at an event in Vietnam. The smartphone has a 6.70-inch touchscreen display with a resolution of 1080x2400 pixels and an aspect ratio of 20:9. It has 6 GB of RAM. The phone runs Android 10.0 out of the box and is powered by a 4000mAh battery with support for proprietary fast charging.

The Samsung Galaxy A71 has been launched in India for Rs. 29,999 for the 8 GB RAM + 128 GB storage variant. The smartphone will be available in Prism Crush Black, Prism Crush Silver, and Prism Crush Blue colour variants. It will go on sale starting February 24 via Samsung Opera House, Samsung.com, and other leading online portals. The new Samsung phone has an Infinity-O Display and comes with the quad rear camera setup. The device runs on Android 10 with the company’s proprietary One UI. The Galaxy A71 was launched in Vietnam in two configurations. However, in India, the phone has been launched in just a single variant. The smartphone competes with the likes of the Vivo V17 Pro, Oppo Reno, Redmi K20 Pro, and OnePlus 7 in India.

The Galaxy A71 has a single ‘Infinity-O’ punch-hole display at the front centre and it has a quad rear camera setup which is neatly positioned on a rectangular box at the top left. The phone has a gradient cross-hatch pattern on its back, and features dual-SIM connectivity, along with a dedicated memory card slot.

Backed by Qualcomm Spectra ISP the phone can deliver up to 4x power savings and brings features such as 4K HDR video capture with Portrait Mode as well as photo and video capture in HEIF format.

Under the hood, the entire package is powered by an octa-core Qualcomm SDM730 Snapdragon 730 (8 nm) processor clocked at 2.2 GHz, along with up to 8 GB RAM and 128 GB storage. The microSD storage slot can expand the space up to 512 GB. It runs on the latest Android 10, with Samsung’s One UI 2.0 custom interface. It has Adreno 618 GPU.

Snapdragon 730 8-core Snapdragon chip uses Kryo 470 cores at up to 2.2GHz and is manufactured using the 8nm process. The UI comes with a number of features including an enhanced Dark Mode, which can be used to improve battery life. Users will see darkened menus and features which are integrated across One UI 2 that keeps the screen muted. It also has a Dynamic Lock screen which refreshes your display with a different image every time your phone is unlocked.

The phone has a 4,500mAh battery which comes with 25 W fast charging. The phone has 128 GB of inbuilt storage that can be expanded via microSD card (up to 512 GB) with a dedicated slot. The Samsung Galaxy A71 supports dual-SIM (GSM and GSM) smartphone that accepts Nano-SIM and Nano-SIM cards.

Connectivity options included on the phone are 4G LTE, GPS/ A-GPS, Wi-Fi, Bluetooth, and USB Type-C port. The phone comes with a dual sim with dual standby feature which supports 4G in both SIM’s. It has USB 2.0, Type-C 1.0 reversible connector, and USB On-The-Go. It comes with NFC for transferring data.

Qualcomm says that its Qualcomm Kryo 470 CPU is designed to extend a smartphone’s battery life while increasing computation capabilities.

The Samsung Galaxy A71 is powered by an octa-core Qualcomm SDM730 Snapdragon 730 (8 nm) chipset with an octa-core 2.2 GHz processor. The phone comes with up to 8 GB of RAM and 128 GB of internal storage which is expandable via a microSD card slot up to 512 GB. The phone runs on the latest Android 10 OS based Samsung’s proprietary One UI 2.0 custom interface. It has Adreno 618 GPU for graphics.

Qualcomm Snapdragon 730 system-on-chip is meant to power mid-to-high-end phones. The Qualcomm Spectra™ 350 ISP features the Computer Vision (CV-ISP) which adds brand-new camera capabilities, says Qualcomm. The chip is able to capture photos and videos in HEIF format. The Snapdragon 730 chip serves up powerful performance and has an impressive battery life, says the company. It can handle sophisticated on-device interactions, fuelled by an 8nm process for enhanced power efficiency in a small size.

It has an Adreno 618 GPU, a Hexagon 688 processor with a tensor accelerator, an X15 LTE modem, a Spectra 350 “computer vision” image signal processor, and support for Wi-Fi 6. This technology according to Samsung can bring AI-powered processing and imagery to mid-range devices.

The phone has a 3.5 mm headphone jack and active noise cancellation with a dedicated microphone. It has an integrated FM Radio and a loudspeaker. The phone comes with USB on the go and has NFC support for data transfer.

Powered by Qualcomm Snapdragon 730 it can capture 4K HDR video capture with Portrait Mode. The phone is also capable of photo and video capture in HEIF format for reduced file sizes

Galaxy A71 comes with an in-display fingerprint sensor, and also includes face recognition. Sensors on the phone re accelerometer, ambient light sensor, compass/ magnetometer, gyroscope, and proximity sensor. The Samsung Galaxy A71 supports face unlock for added security as well as quick access.

The Samsung Galaxy A71 has been launched in Vietnam and Poland as of now. There is no information about the price and availability in India as yet.

Samsung Galaxy A71 Price in India updated on 8th Mar 2021