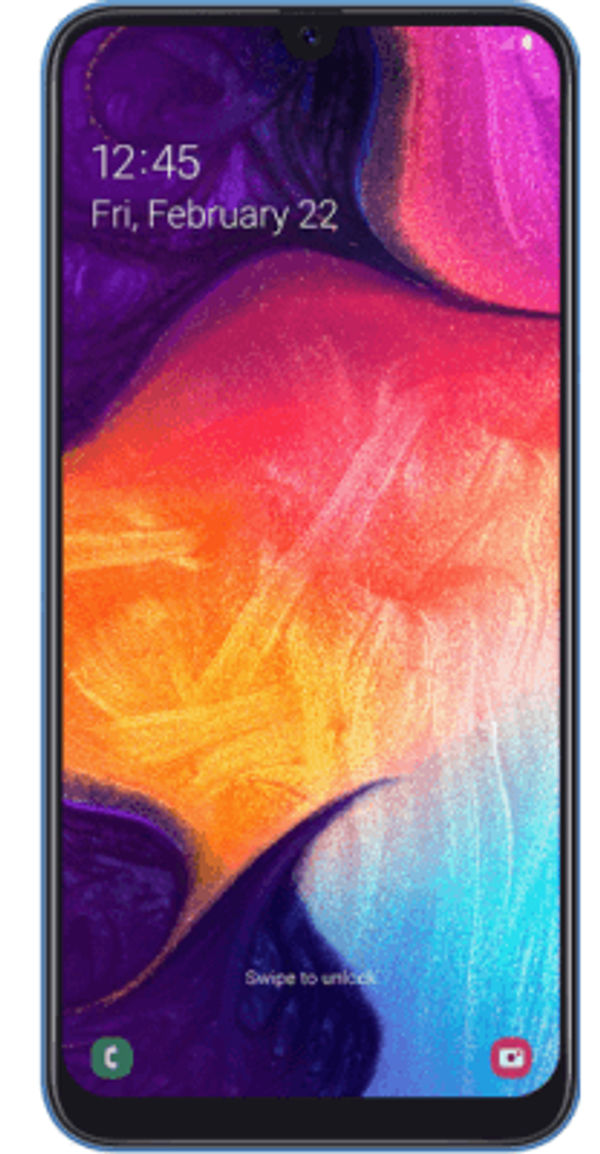 Samsung Galaxy A50 Price in India

Samsung has launched the Galaxy A50 a mid-range mobile phone that competes with the like of Redmi Note 7 Pro and Pocophone F1. The Samsung Galaxy A50 is available in two variants, one with 4 GB RAM and another with 6 GB RAM. The 4GB RAM variant is priced at Rs 19,990, while the 6GB RAM version is available for Rs 22,990. The phone is available on Flipkart as well as Samsung’s own online store as well as at

Samsung has lost its market share to Xiaomi in the budget segment over the past few years. The company has decided to launch new models in its budget and mid-range series to grab its market share. The Samsung Galaxy A50 is the company’s offering which is aimed at budget users.

The Galaxy A50 has a gradient style that gives a rainbow-like sheen. The phone has a plastic body and weighs 166 grams. The phone’s central frame is made of metal and has a volume rocker and power button on the right side. On the left side of the phone is a tray with dual nano-SIM card slots as well as a dedicated microSD card slot. On the bottom edge of the phone is the 3.5mm headphone jack, along with a USB-C port as well as the speaker grille.

The phone has a 6.4-inch Super AMOLED capacitive touchscreen, with 16M colours and an 84.9% screen-to-body ratio. It has 1080 x 2340 pixels display resolution and a 403 ppi density. The device is protected by Corning Gorilla Glass 3. The Samsung Galaxy A50 supports an Infinity-U waterdrop notch, with a slim side and top bezels.

The phone has a 25 MP front-facing camera for clicking pictures and making video calls. The Galaxy A50 has a triple rear camera setup which uses a combination of a 25 MP primary camera combined with an 8 MP wide-angle lens and a 5 MP depth sensor. The camera comes with features like LED flash, panorama, and HDR shot.

The Galaxy A50 is powered by the Exynos 9610 chipset, b on a 10nm fabrication process and the chipset uses an octa-core big. LITTLE architecture. It has four Cortex A73 cores clocked at 2.3GHz, and four Cortex A53 clocked at 1.6GHz. The device has a Mali G72 MP3 GPU which handles the graphics.

The galaxy A50 runs on Android Pie OS out of the box. It has One UI-based interface which is similar to that on the Samsung Galaxy S10. The phone ships with 4GB or 6GB of RAM. It has an optical in-display fingerprint scanner, an accelerometer, gyroscope, proximity, and compass sensors.

The mobile phone is powered by a 4,000mAh battery gives a full day of use according to the company. The phone supports 15-watt fast charging and ships with 64 GB internal storage expandable up to 1 TB via microSD card slot. The company claims that the phone can deliver up to 12 hours of Internet Usage Time(3G). Up to 19 hours of Video Playback Time, and up to 92 hours of audio playback time. The phone can deliver a talk time of up to 23 hours. Galaxy A50s supports up to 15W fast charging, which can charge the phone in an hour and a half. However, it ships with a 10W charger in the box which will take it longer to charge.

In the box, you will find a headset and a plastic slipcase in addition to a SIM eject pin, a 15W charger, and a USB Type-C cable. The phone comes with both an on-screen navigation button as well as full-screen gestures. Unlike the Galaxy S10 series, the smartphone doesn’t have a Bixby button. The company has also integrated ‘lock screen stories’ which is also present on the Galaxy M-series phones.

Samsung Galaxy A50 is powered by an Exynos 9610 chipset. Samsung’s in-house developed chip is based on the 10nm FinFET process and is comes with an octa-core divided into two quad-core clusters. The phone has one cluster with Cortex-A73 cores clocked at 2.3GHz, and the second one with Cortex-A53 CPUs ticking at 1.7GHz. It is coupled with Mali G72MP3 GPU.

The dual-SIM tray which comes with a dedicated microSD card slot is placed on the upper left side of the phone. The Exynos 9610, an octa-core mobile processor is built on a 10nm FinFET process and features an LTE modem and diverse wireless connectivity for faster and seamless mobile experiences. This processor incorporates a Mali-G72 MP3 GPU and can support up to 4 GiB of quad-channel LPDDR4x-3200 memory. The chip incorporates an LTE modem that supports Cat 12 600Mbps download and Cat 13 150Mbps upload as well as 802.11ac, Bluetooth 5.0, and a 24 MP ISP.

The power and volume buttons of the phone are on the right of the device. The USB Type-C port, as well as a 3.5mm headphones socket and a speaker grille, are placed on the bottom of the device. The phone has an FM Radio. Galaxy A50 supports Dolby Atmos surround sound through wired and Bluetooth headphones. The phone comes with Widevine L1 certification, which allows you to stream content on platforms like Netflix and Prime Video in true HD clarity.

Samsung Galaxy A50 comes with an array of sensors. It has an in-display fingerprint sensor. Apart from the device comes with the usual accelerometer, gyroscope, proximity, and compass sensors. The company has added Google's new gesture-based navigation, which works as conventional buttons. Swiping from the bottom-left brings out the recent apps menu by default and swiping from the bottom-right takes users back a step. You also have the choice of swapping them in the settings menu, however, the home button remains as a single swipe from the bottom-center. The phone comes with a few Samsung apps, Microsoft office apps and third-party apps like Helo, DailyHunt, and Snapchat. 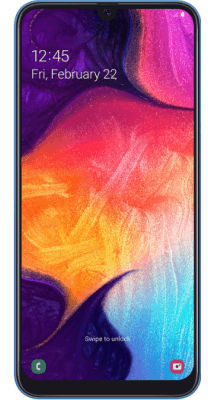 The Samsung Galaxy A50 features a 6.4 inches Super AMOLED with 1080 x 2340 resolution and has Capacitive.

Yes, the Samsung Galaxy A50 has a fingerprint sensor.

Samsung Galaxy A50 Price in India updated on 6th Dec 2022

Samsung Galaxy A50 In News View All

Samsung Galaxy A14 5G has been listed on the brand’s website, could launch soon

Over the course of the last few months, we’ve seen plenty of leaked reports surrounding the Samsung Galaxy A14 5G. Most of its specifications have already been revealed (though not confirmed), however, the missing piece...

Samsung’s Galaxy S-series is one of the most anticipated lines of smartphones every year. The next in line in this series is going to be the Samsung Galaxy S23 family of phones. A new report...

According to industry sources, the Samsung Galaxy M04 will launch soon. The brand has created many teaser posters that indicate that this smartphone’s price will start at under ₹10,000, with a few variants being priced...

Samsung and other devices vulnerable after a major Android security leak

An Android security leak recently led to the development of trusted malware apps that allow hackers to gain access to the entire Android OS. The leak has left Samsung, Xiaomi, LG, and other Android smartphones...

Overall Rating
4.9/5
Based on 10 Ratings View Detail
Based on 10 Ratings
Click here for more Reviews
New Mobiles
Realme 10 Pro | Oneplus 11 Pro | Vivo X90 Pro Plus | Vivo V27
Latest Post
Samsung Galaxy A14 5G has been listed on the brand’s website, could launch soon | What’s the difference between Google Felix and Google Pixel Pro 7? One of them folds | Xbox first-party game prices to shoot up from ₹4,936 to about ₹5,758 | God of War: Ragnarok’s 3.0 patch lets Kratos and Atreus make silly faces with a new Photo Mode | OnePlus 11 official renders are out: Here's what they show
Top-10s
Best Phone under 15000 | Best Phone under 20000 | Best Phone Under 10000 | Best Mobile Phones | Best 5G Mobile Phones