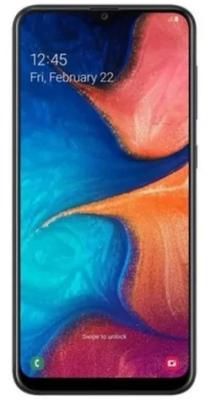 Current Best Price of Samsung Galaxy A20 is ₹ 0

Samsung Galaxy A20 smartphone has a 6.40-inch touchscreen display with 720 x 1560 pixels resolution. The phone is powered by an octa-core Samsung Exynos 7884 processor and has 3 GB of RAM. It runs on Android and is powered by a 4000mAh battery.

The phone has a dual rear camera set-up which includes a 13 MP primary camera with an f/1.9 aperture and a second 5 MP

Samsung has launched a number of Galaxy A series of phones in the last few months like Samsung Galaxy A20s and Galaxy A70.

The Samsung Galaxy A20 has a 6.4 inches Super AMOLED display and has an 85.0% screen-to-body ratio. It has a pixel density of 268 ppi and comes with Corning Gorilla Glass protection against scratches. It has an Infinity V style notch at the top. The Samsung Galaxy A20’s dimensions are 158.40 x 74.70 x 7.80mm and it weighs 169 grams. It is available in Black, Deep Blue, Red, Coral Orange, and Gold colours.

The phone runs on Android 9.0 (Pie) based company’s proprietary One UI.

The Samsung Galaxy A20 is available only in 1 variant in India. The phone packs 32 GB of inbuilt storage that can be expanded via microSD card (up to 512 GB). It is backed by a non-removable Li-Po 4000 mAh battery with support for 15 W fast charging.

Connectivity options including on the Samsung Galaxy A20 are Wi-Fi, Bluetooth, USB, NFC, GPS, and USB on the go. Sensors included in the phone are a fingerprint sensor. The phone comes with Dual 4G VoLTE support but doesn’t have dual-band Wi-Fi support. The dual SIM smartphone supports dual 4G and dual standby.

The phone is powered by Samsung’s Exynos 7884 octa-core processor and runs Android 9.0. It is available in 3 GB RAM and 32 GB of internal storage which is expandable up to 512 GB via a microSD card slot. 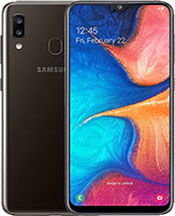 Write a review on Samsung Galaxy A20