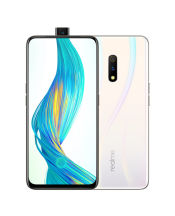 The Realme X is a solid contender from Realme for the title of the king of mid-rangers. It packs the Snapdragon 710 chipset with a superior GPU, making it impressive for gaming, and has a really bright display. The battery life is good too, but where the phone does falter is with respect to its camera. 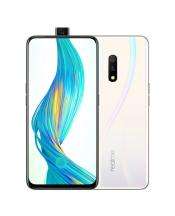 Realme X 8GB 128GB was launched in July 2019 & runs on Android 9.0 OS. The Smartphone is available only in one color i.e. White and Blue & has a built in fingerprint sensor as the primary security feature, along with the host of connectivity options in terms of 3G, 4G, GPS, Wifi Bluetooth capabilities. The phone is available with 128GB of internal storage.

The Smartphone is powered by a octa core Snapdragon 710 Processor. A 8GB of RAM ensures phone

runs smoothly even the most memory intensive applications & still shows no signs of lag. 128GB of internal storage can not be expanded further.

The Phone comes with a large 3765 mAh battery to support it's 6.53 inch screen with an IPS display having a resolution of 1080 X 2340. The screen is also protected by a Corning Gorilla Glass.

The Realme X7 series could officially launch on February 4 in India, as per the latest leak. The Realme X7 and Realme X7 Pro have been teased by the company and are slated to launch...

We got a glimpse of a new Realme phone in a recent tweet shared by Realme CEO Madhav Sheth, and as per a previous story covered last week, the new phone seems to be the...