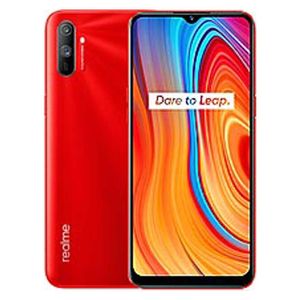 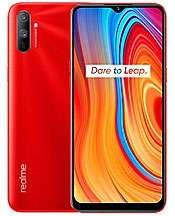 The Realme C3 smartphone was launched in India in February 2020. The phone comes with a 6.52-inch touchscreen display with 720 x 1600 pixels resolution. The device is powered by an octa-core MediaTek Helio G70 processor with 3GB of RAM. It runs Android 10 and is powered by a 5000mAh battery. The Realme C3 in India is priced at Rs.6,999 for the base variant of 3 GB RAM and 32 GB

A new variant of the Realme C3 with triple rear cameras and a fingerprint scanner has been launched in Thailand. The phone is backed by a MediaTek Helio G70 SoC, a 6.52-inch display, and a 5,000mAh battery. The device will be available in two colour variants, Frozen Blue and Blazing Red. The smartphone is priced at approx. Rs. 9,100 and will be available from February 20. It remains to be seen whether the new variant will be launched in India as well.

The phone has a 6.5-inch HD+ display with the 20:9 aspect ratio. It has a 720 x 1560 pixels screen resolution and comes with Corning Gorilla Glass 3 protection. It measures 164.40 x 75.00 x 8.95mm and weighs 195.00 grams. The phone is available in Blazing Red, Blue, and Frozen Blue colours. The phone has a dewdrop notch design which houses the selfie camera.

The Realme C3 has a dual rear camera setup which includes a 12 MP primary camera with an f/1.8 aperture, and a second 2 MP camera with an f/2.4 aperture. The phone has a 5 MP camera on the front for clicking selfies. It has a number of camera modes including Portrait, Time-lapse, Slo-mo, Expert, and Pano modes.The phone’s camera has features like LED flash, HDR, and panorama shot.

The Realme C3 runs the company’s proprietary ColorOS 7.0 which is based on Android 10. The Realme C3 features the new MediaTek Helio G70 SoC, which is an octa-core processor clocked at 2.0 GHz. It has Mali-G52 2EEMC2 GPU with 3 GB of RAM.

The phone packs 32GB of inbuilt storage that can be expanded via microSD card up to 256 GB with a dedicated sim slot. The Realme C3 supports dual-SIM (GSM and GSM) which accepts Nano-SIM and Nano-SIM cards. The phone is backed by a 5,000mAh battery.

It is available in two variants one with 32 GB of RAM and the second with 64 GB of internal storage. At the bottom of the device, the phone has a Micro-USB port, 3.5mm audio jack, and a loudspeaker grille. Sensors on the phone are an accelerometer, ambient light sensor, proximity sensor, and compass/ magnetometer. It runs on Android 10 based ColorOS 7.0.

Compare Vivo U20 VS Realme C3