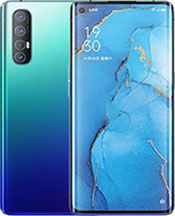 The Oppo Reno3 Pro 5G smartphone has a plastic back and chassis. The phone has a power button, volume button, and the SIM tray. The phone has a USB-C port for charging and doing file transfers. Oppo has retained the 3.5mm headphone jack on the phone.

The Reno3 Pro 5G has a 6.4-inch Super AMOLED display, with two punch holes for the front-facing camera setup. The phone has 2,100 x 1,080 pixels resolution and a 20:9 aspect ratio. It has a maximum brightness of 800 nits. The phone has a Full Care Display Certification from TÜV Rheinland. The Oppo Reno3 Pro 5G has an under-display fingerprint sensor which Oppo calls the Hidden Fingerprint Unlock 3.0. The company states that the phone can be unlocked in just 334ms when the screen is on with the fingerprint sensor, and within 358ms when the screen is off.

The phone has a 6.50-inch touchscreen display with 1080 x 2400 pixels resolution and a pixel density of 402 pixels per inch (ppi). The phone has a glass body and comes with Corning Gorilla Glass 5 protection. The Oppo Reno 3 Pro 5G has dimensions of 159.40 x 72.40 x 7.70mm and weighs 171.00 grams. The phone is available in Moon Night Black, Misty White, Sunrise Impression, and Blue Starry Night colours.

Under the hood, the Oppo Reno 3 Pro 5G is powered by a 2.4GHz octa-core Qualcomm Snapdragon 765G processor paired with 8GB of RAM. It runs on Android 10.0 OS out of the box with the company’s preoperatory ColorOS 7 on top.

The phone is powered by a 4025mAh battery and supports VOOC fast charging at 30W. the company claims that the phone can charge to 50% in just 20min (VOOC Flash Charge 4.0). The device comes with 128GB of internal non-expandable phone memory.

The Oppo Reno 3 Pro 5G runs on the company’s proprietary ColorOS 7 based on Android 10 and is powered by a Qualcomm Snapdragon 765G octa-core processor which was launched in 2109. The chipset comes with Qualcomm Snapdragon Elite Gaming features and support for all-day battery life, according to Qualcomm. The phone packs 128GB of inbuilt storage which is non-expandable. The Oppo Reno 3 Pro 5G supports dual-SIM (GSM and GSM) which accept Nano-SIM and Nano-SIM cards.

Oppo has launched the Reno 5K as its latest Oppo Reno series device. The phone has been launched in China and offers specifications to take on other upper-mid-range smartphones available in the market. The phone...

The folks over at Oppo have been keeping themselves busy with a lot of smartphone launches, and it's no secret that the company is preparing to launch a few more devices over the next couple...