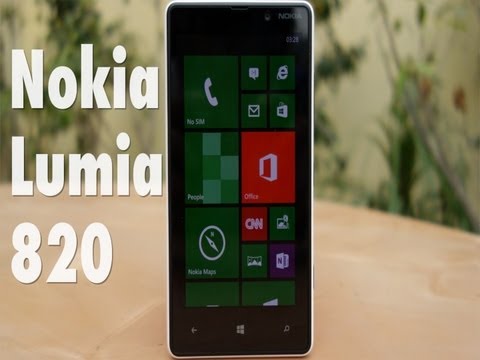 The Nokia Lumia 820 is a very competent phone, and there is no doubting its consistency in terms of performance. The unfortunate thing for the Lumia 820 is the fact that the Lumia 920 gathers all the attention, and this remains as a footnote. For these specs, Nokia should essentially have pegged this in line for competition with the HTC Windows Phone 8S. Instead, with a MOP of roughly Rs. 27,500, the Lumia 820 is overpriced.

Nokia Lumia 820 was launched in January 2013 & runs on Windows Phone 8 OS. The Smartphone is available only in one color i.e. default & provides a host of connectivity options in terms of 3G, GPS, Wifi capabilities. Priced at Rs. 15317 the phone is available with 8 GB of internal storage.

The Smartphone is powered by 1.5 Ghz Dual core Qualcomm Snapdragon S4 Processor. A 1 GB of RAM ensures phone runs smoothly even the most memory intensive applications

The Phone comes with a 1650 mAh battery to support it's 4.3 inch screen with OLED Capacitive touchscreen display having a resolution of 480 x 800 at 217 ppi.

Honor as announced a new mid-range smartphone in China, the Honor X10. It comes with 5G support, features a pop-up camera and isn’t heavy on the pockets. The company is looking to increase the adoption...

MediaTek announced a new Dimensity chipset for smartphones which according to the chipset giant falls in the mid-premium category. Called the Dimensity 820, the SoC supports 5G connectivity and the company’s “latest multimedia, AI, and...