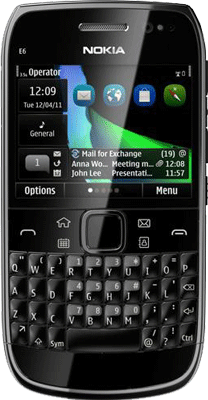 For a price of around Rs. 17k, the E6 is a smartphone with the touchscreen plus physical QWERTY keypad, latest Symbian Anna OS, a sleek (albeit slightly heavy) form factor and an excellent battery life. While it is often said that the E-series competes directly with Blackberry smartphones, it is interesting to note that the E6 falls slam bang between two Blackberry smartphones (the Curve 3G @ Rs. 14k and the Bold 9700 @ Rs. 19k), and isn't really competing with either of them.
Read full Review

Nokia E6 was launched in June 2012 & runs on Symbian Anna OS. The Smartphone is available only in one color i.e. default & provides a host of connectivity options in terms of 3G, 4G, GPS capabilities. Priced at Rs. 32013 the phone is available with 8 GB of internal storage.

The Smartphone is powered by 680 MHz single core ARM 11 Processor. A 256 MB of RAM ensures phone runs smoothly even the most memory intensive applications & still shows

no signs of lag. 8 GB of internal storage can be expanded to 32 GB via a microSD card.

The Phone comes with a 1500 mAh battery to support it's 2.46 inch screen with TFT LCD Capacitive touchscreen display having a resolution of 480 x 640 at 325 ppi. The screen is also protected by a durable Scratch Resistant glass.

It looks like Nokia is planning a new mid-range smartphone alongside the often leaked Nokia 7.3 and Nokia 9.3 PureView this year. According to a report by Nokia Power User, HMD Global is planning to...

If you are rocking a Nokia 9 PureView smartphone then there is good news for you. The smartphone has started receiving the Android 10 update. If you haven't received the update on your device, you...

Write a review on Nokia E6