The Nokia 2.4 has been launched in India and comes with a waterdrop-style display. The device is touted to deliver two-day battery life on a single charge according to the company.

The Nokia 2.4 comes with a Nordic design and has three distinct colour options. For photos and videos, the Nokia phone has dual rear cameras. Under the hood, the phone has a MediaTek MT6762 Helio P22

The Nokia 2.4 price in India has been set at Rs. 10,399 for the lone 3 GB RAM + 64 GB storage variant. The phone is available in Charcoal, Dusk, and Fjord colours. The phone will be available in offline stores as well as on online e-commerce stores.

The smartphone has a dual rear camera setup that houses a 13 MP primary sensor with an f/2.2 lens and a 2 MP depth sensor. For selfies, the phone has a 5 MP camera sensor at the front, with an f/2.4 lens.

The dual-SIM (Nano) Nokia 2.4 smartphone runs on Android 10 and the company has stated that it will be releasing two years of OS updates, including Android 11 and Android 12 update. Under the hood, the phone is powered by an octa-core MediaTek Helio P22 SoC paired with 3 GB of RAM. It has PowerVR GE8320 GPU. The phone comes with a Fingerprint (rear-mounted) sensor, an accelerometer, and a proximity sensor.

The Nokia 2.4 features a rear-mounted fingerprint sensor and also has a dedicated Google Assistant button.

The Nokia 2.4 has 64 GB of onboard storage that is expandable up to 512 GB via a microSD card slot. The phone has a Li-Po 4500 mAh battery. The company has stated that the phone can deliver two-days of battery life on a single charge.

Connectivity options included on the phone are 4G LTE, Wi-Fi, Bluetooth v5.0, GPS/ A-GPS, and a Micro-USB port. It comes with FM radio support as well as includes a 3.5mm headphone jack.

The Nokia 2.4 smartphone runs on Android 10 OS and the company has also promised two years of OS updates, which will be Android 11 and Android 12. Under the hood, the Nokia 2.4 comes with an octa-core MediaTek Helio P22 processor, coupled with 3 GB of RAM. 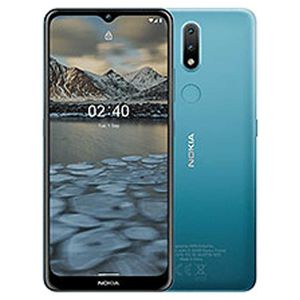 Yes, the Nokia 2.4 has a fingerprint sensor.

HMD Global has teased the launch of two smartphones on November 26 on social media, and based on the visuals in the 14-second teaser, it seems like the Nokia 2.4 and the Nokia 3.4, that...

HMD Global launched the budget Nokia 2.4 smartphone in India last week at Rs 10,399 in Dusk, Fjord and Charcoal colours. The smartphone is now on sale in the country starting today at leading retail outlets...