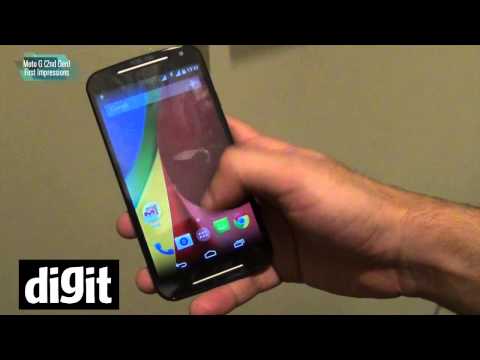 The Moto G (2nd Gen) is a very good smartphone, but it is no longer the best in class. The competition it faces is much tougher than its predecessor and the Xiaomi Mi3 and Micromax Canvas Nitro both perform better than this device, while the Asus Zenfone 5 is another option to choose from. The only thing the new Moto G has over these devices is brand recognition. It does give good value for your money.

Motorola Moto G (2nd Gen) was launched in October 2014 & runs on Android 4.4.4 OS. The Smartphone is available only in one color i.e. default & provides a host of connectivity options in terms of 3G, 4G, GPS capabilities. Priced at Rs. 14000 the phone is available with 16 GB of internal storage.

The Smartphone is powered by 1.2 Ghz Quad core Qualcomm Snapdragon 400 Processor. A 1 GB of RAM ensures phone runs smoothly even the most memory intensive

applications & still shows no signs of lag. 16 GB of internal storage can be expanded to 32 GB via a microSD card.

The Phone comes with a 2070 mAh battery to support it's 5 inch screen with IPS LCD Capacitive touchscreen display having a resolution of 720 x 1280 at 294 ppi.

Motorola Moto G (2nd Gen) comes with a 8 megapixel rear Camera and 2 megapixel front Camera. The Smartphone is also loaded with Optical Image Stablization and has a low camera aperture of f/2.0.

Motorola Edge Lite has allegedly leaked as an affordable mid-range smartphone in the company’s flagship Edge series. The Motorola Edge Plus was announced in India last month on May 19 at Rs 74,999, going up...

Motorola One Fusion+ has launched in India just a few hours ago and is a mid-range offering from Motorola. The phone brings 64MP quad cameras to the table along with a high-resolution display, pop-up selfie...

Motorola One Fusion+ is set to launch in India in the coming weeks as has been confirmed by the company. The One Fusion+ was announced earlier this week on June 8 in Europe as Motorola’s...