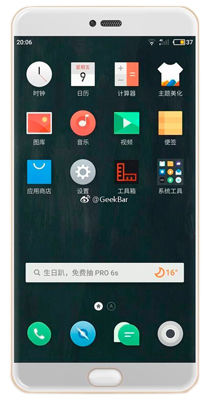 Current Best Price of Meizu Pro 7 Plus is ₹ 0

Meizu Pro 7 Plus in pictures

Meizu Pro 7 Plus was launched in July 2017 & runs on Android 7.1 OS. The Smartphone is available only in one color i.e. default & has a built in fingerprint sensor as the primary security feature, along with the host of connectivity options in terms of 3G, 4G, GPS, Wifi, NFC Bluetooth capabilities. The phone comes in 64GB & 128GB variants.

The Smartphone is powered by a Octa core Helio X25 Processor. The 6 & 8 GB RAM options ensure phone runs smoothly even the most memory intensive applications & still shows no signs of lag. 64GB & 128GB of internal storage options can not be expanded further.

The Phone comes with a large 3500 mAh battery to support it's 5.7 inch screen with Full HD IPS LCD Capacitive Touchscreen display having a resolution of 1080 x 1920 at 396 ppi.

Meizu Pro 7 Plus comes with a 21 megapixel rear Camera and 8 megapixel front Camera. The Smartphone has a low camera aperture of 2.0. It also supports Face Detection.

OnePlus Nord 2 is now confirmed to launch on July 22 in India as the successor to the OnePlus Nord that debuted in 2020. OnePlus has also confirmed that the Nord 2 will be its...

The OnePlus 9(₹ 54999 at amazon) and the OnePlus 9 Pro are the latest flagships from the company. Launched earlier in the year, the devices come with flagship Qualcomm chipsets -- the Snapdragon 888. These...

It looks like Nokia is finally launching the Nokia G20 in India. A microsite of the phone was spotted on Amazon India. In it, the launch date seems to not have been included but a...

User Reviews of Meizu Pro 7 Plus