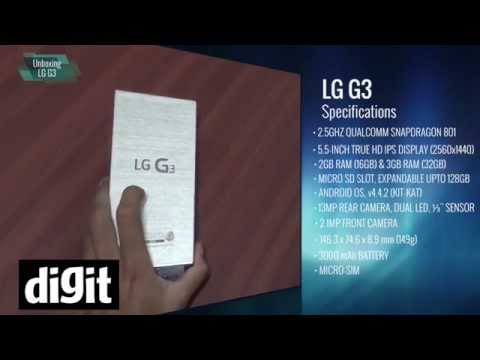 It is not often that we call a device the best flagship smartphone in the market, but the LG G3 may very well deserve this monicker. It is a well built smartphone that has flagship specs and lives up to its spec sheet. Definitely something you could buy.

LG G3 was launched in July 2014 & runs on Android 4.4.2 OS. The Smartphone is available only in one color i.e. default & provides a host of connectivity options in terms of 3G, GPS capabilities. Priced at Rs. 45677 the phone is available with 16 GB of internal storage.

The Smartphone is powered by 2.5 GHz quad core processor. A 2 GB of RAM ensures phone runs smoothly even the most memory intensive applications & still shows no signs of

lag. 16 GB of internal storage can be expanded to 128 GB via a microSD card.

The Phone comes with a large 3000 mAh battery to support it's 5.5 inch screen with IPS LCD Capacitive touchscreen display having a resolution of 1440 x 2560 at 534 ppi.

LG G3 comes with a 13 megapixel rear Camera. The Smartphone is also loaded with Optical Image Stablization and has a low camera aperture of f/2.4. It also supports Face Detection and high dynamic range(HDR) imaging.

LG G3 Price In India Starts From Rs.5999 The best price of LG G3 is Rs.5999 on Amazon.This Mobile Phones is expected to be available in 16GB variant(s).