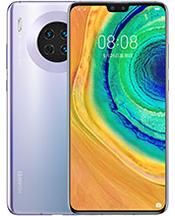 Huawei Mate 30 smartphone was launched on Sept 19, 2019, in an event in Germany. The Mate 30 series will ship without the Google Mobile Services core and will have its own Huawei Mobile Services core. The phone will have access to apps with the Huawei AppGallery which receives over 390 million monthly active users and garners 180 billion downloads a year. The store is available in over 170 countries/ regions worldwide.

The Huawei Mate 30 has a 6.62-inch full-HD+ (1080x2340 pixels) Rigid OLED FullView Display with a 19.5:9 aspect ratio. It has an anti-blue light technology that restricts 65% of blue light. The device comes with a HiCar feature which provides seamless connectivity with a car's communication and entertainment system. It is available in Black, Space Silver, Cosmic Purple, and Emerald Green colours. It has dimensions of 160.8 x 76.1 x 8.4 mm and weighs 196 grams.

Huawei Mate 30 has a SuperSensing triple rear camera setup which comprises of a 40MP primary sensor with an f/1.8 lens, a 16MP secondary sensor with an ultra-wide-angle f/2.2 lens, and a third 8MP tertiary sensor with an f/2.4 telephoto lens. It has ISP 5.0 Image Signal Processor (ISP). The phone has OIS and AIS for image stabilisation, laser focus, and a zooming range of 45x. It has a 24 MP front selfie camera. The camera features Leica optics, dual-LED dual-tone flash, panorama, and HDR.

Huawei Mate 30 runs on the latest Android 10 OS out of the box. The phone is powered by the company’s own Kirin 990 processor which was announced at the IFA 2019 trade show in Berlin. Connectivity options included in the device are Bluetooth, USB, Wi-Fi, 3G, 4G, and GPS. has an array of sensors including face unlock and fingerprint sensor for added security. It has a proximity sensor, accelerometer, ambient light sensor and a gyroscope.

The phone packs a 4200 mAH battery and will have ample space for all your music, videos, etc. It has fast charging technology as well as wireless charging. The Huawei Mate 30 comes with 128GB of expandable phone memory.

Poco has officially confirmed that it is launching a new phone on March 30 in India. While the company has not officially revealed the name of the phone, it's likely the Poco X3 Pro or...