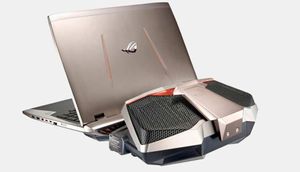 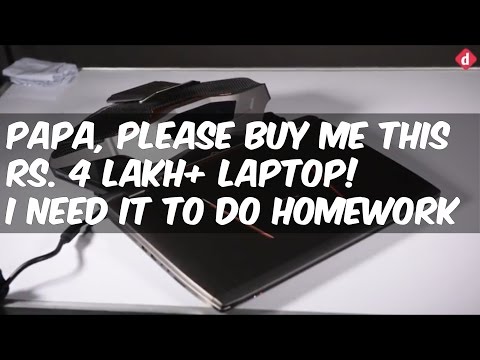 Asus ROG GX700 is termed as the world's first liquid-cooled laptop and it comes with a detachable ROG-exclusive Hydro Overclocking System cooling module that provides ultimate cooling capabilities with its dual 92mm radiators that, according to the company are capable of dissipating over 500W of heat. This System helps decrease CPU and GPU temperatures by 31% and 33% respectively. It also makes superior overlocking possible to the extent that the CPU can be overclocked up to 48 percent and the

DDR4 memory can be overclocked by up to 43 percent. It also has traditional cooling which can be run without the liquid cooling dock. The laptop comes packed in a specially-made ROG-themed briefcase for the ease of carrying around.
Asus ROG GX700 runs Windows 10 Home OS and is powered by a sixth generation Intel 'Skylake' Core i7-6820HK processor clocked at 2.7 GHz with Turbo boost upto 3.6 GHz. On the memory front, it comes with 512 GB SSD and 16GB of DDR4 RAM that can be expanded up to 64GB. It incorporates a dedicated Nvidia GeForce GTX 980 GPU with 8GB of GDDR5 VRAM. The laptop sports a 17.3-inch 4K Ultra HD anti glare display with a resolution of 3840 x 2160 pixels and is integrated Nvidia G-Sync technology. Other important features of the device are a 6 cell battery, an HD webcam, Asus Sonic Sound audio technology and built in speaker with array mic and subwoofer. The connectivity options available on Asus ROG GX700 are WiFi, Bluetooth, headphone jack, RJ45, 3 x USB 3.0, 2 x USB 3.1, 1 thunderbolt port, 1 HDMI, 1 x mini display port and 1 SD card reader.
read more

Asus adds new ZenBook and VivoBook laptops to its arsenal in India: Specifications and pricing

Asus ZenBook 13, ZenBook 14, VivoBook S14 and VivoBook Ultra K14 have launched in India as the Taiwanese company’s latest thin and light laptops. These laptops are powered by 10th generation Intel Core i7 processors...

Asus has been making big announcements all around, given that both Intel and Nvidia introduced new gaming-specific hardware as well. After introducing the new Zephyrus lineup, Asus gas also announced major upgrades to its Strix...

In the wake of Intel’s announcement of their 10th generation H-series processors and Nvidia also announcing new GPUs for laptops, news of new machines have started to pour in. Asus today has announced several new...