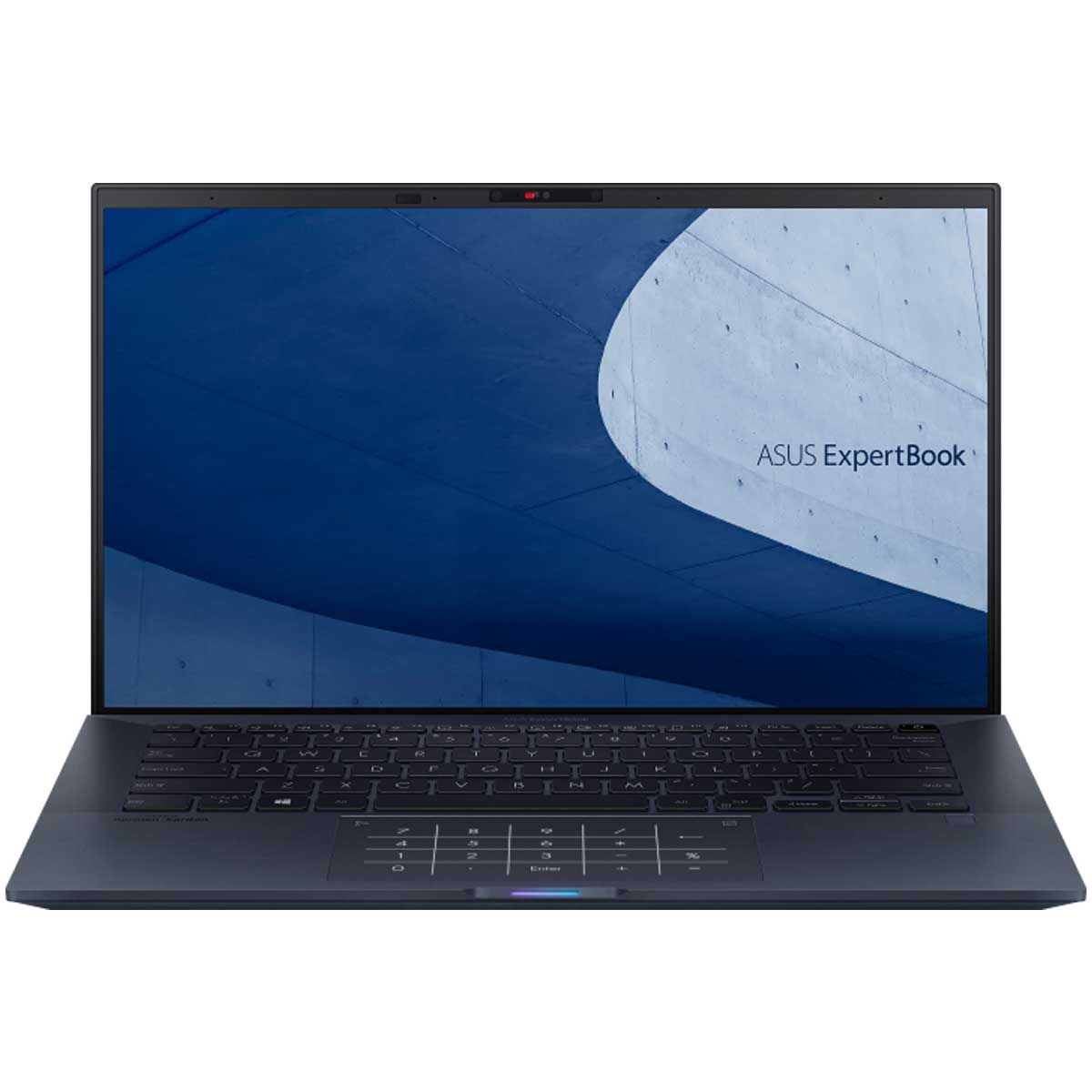 The ASUS Expertbook B9400 is a first-class business laptop that stands out from the multitude of enterprise notebooks out there on the market. Its ultra-portable form factor is an appealing draw on its own, but the laptop truly shines with its battery life and performance. ASUS has also peppered it with some truly desirable features like a physical shutter/kill switch for the webcam, a virtual numeric keypad on the touchpad, Windows Hello support, and more to make it an unequivocal ultrabook recommendation.

ASUS ExpertBook B9 (B9400) Full Specifications

ASUS ExpertBook B9 (B9400) Brief Description

The ASUS ExpertBook B9400 is a thin and light laptop that belongs to the ExpertBook series. This is ASUS' top-of-the-line ultrabook for the year 2021 and it's already to purchase here in India. The laptop is powered by some of the powerful internals to go head-to-head with other offerings in this category of laptops. 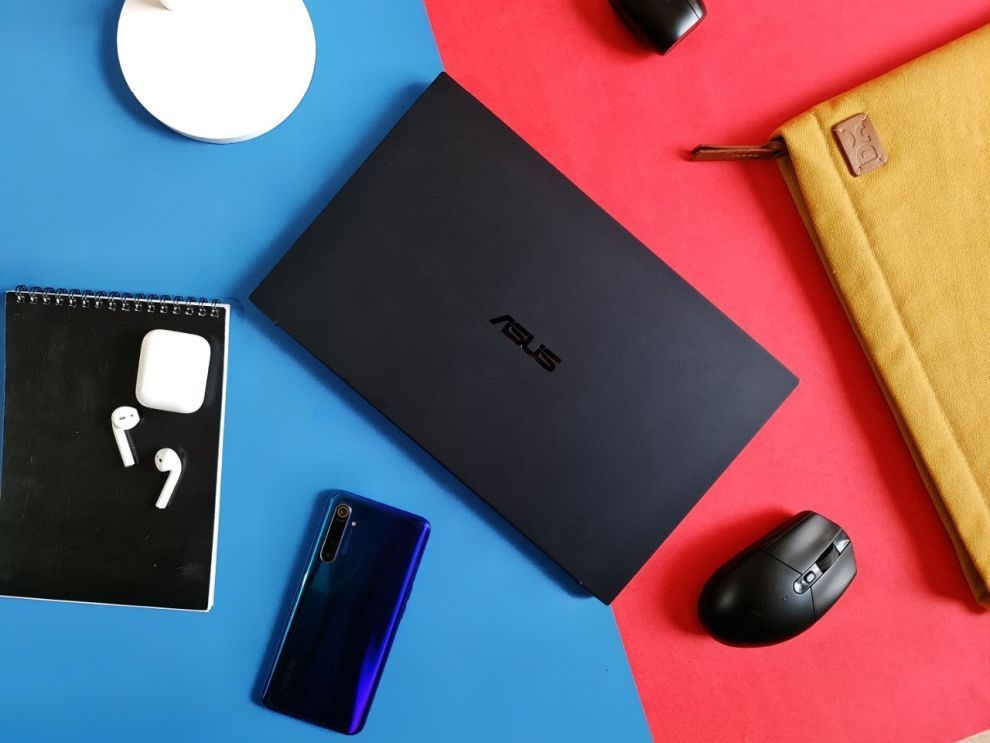 The ExpertBook B9400 is based on Intel's EVO platform which means it is capable of delivering snappy performance for day-to-day workloads without any issues. n 11th-gen Intel Core i7-1165G7 processor is at the heart of this laptop along with up to 32GB of LPDDR4X RAM and up to dual 2TB M.2 NVMe SSD with RAID 0 & RAID 1 support.

With specifications like that, you already know this is going to be a solid machine, and our test results showed up some promising numbers as well. The Core i7-1165G7 is a quad-core CPU with a base clock of 2.8Ghz and a turbo frequency of up to 4.7Ghz. The laptop managed to perform really well in our benchmark tests, beating the likes of HP Pavilion Laptop 13 and the HP ProBook 635 Aero G7 that are powered by Intel Core i5-1135G7 and the Ryzen 7 4700U, respectively. 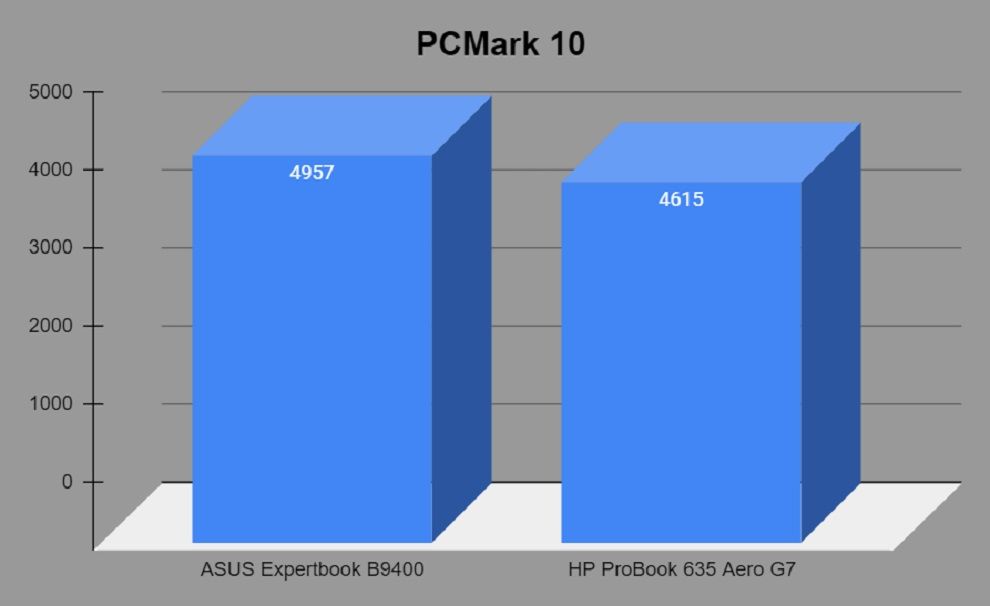 That being said, the ExpertBook B9400 did show some signs of thermal throttling while running the benchmark test as the temperature started exceeding 90° C. The CPU hit 45W TDP during the test and kept fluctuating thereafter to hit 28W on average. The Intel Iris Xe graphics also managed to perform very well and we suggest you check our full review of the laptop to learn more about its performance in detail.

The ExpertBook B400 also comes with an M.2 NVMe SSD for incredible read/write speeds on RAID 0 OR RAID 1. We recorded sequential read speeds of up to 2597MB/s but there was a slightly higher write latency which is a downside of Raid 1 storage. 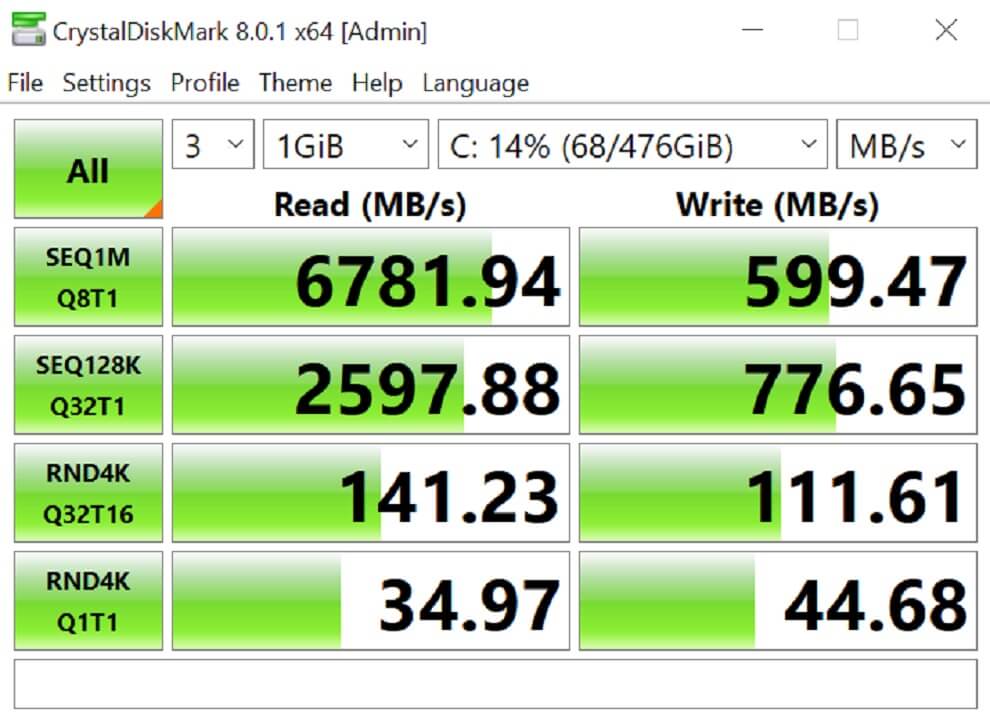 The ASUS ExpertBook B9400 comes with a 14-inch FHD IPS panel with an anti-glare coating. This is the only display option you get for this laptop and the resolution is limited to 1080p only. The display is pretty sharp and it shows good colours for all kinds of content as it covers 100% sRGB colour space. The panel also has great viewing angles and it has a peak brightness of 400 nits. 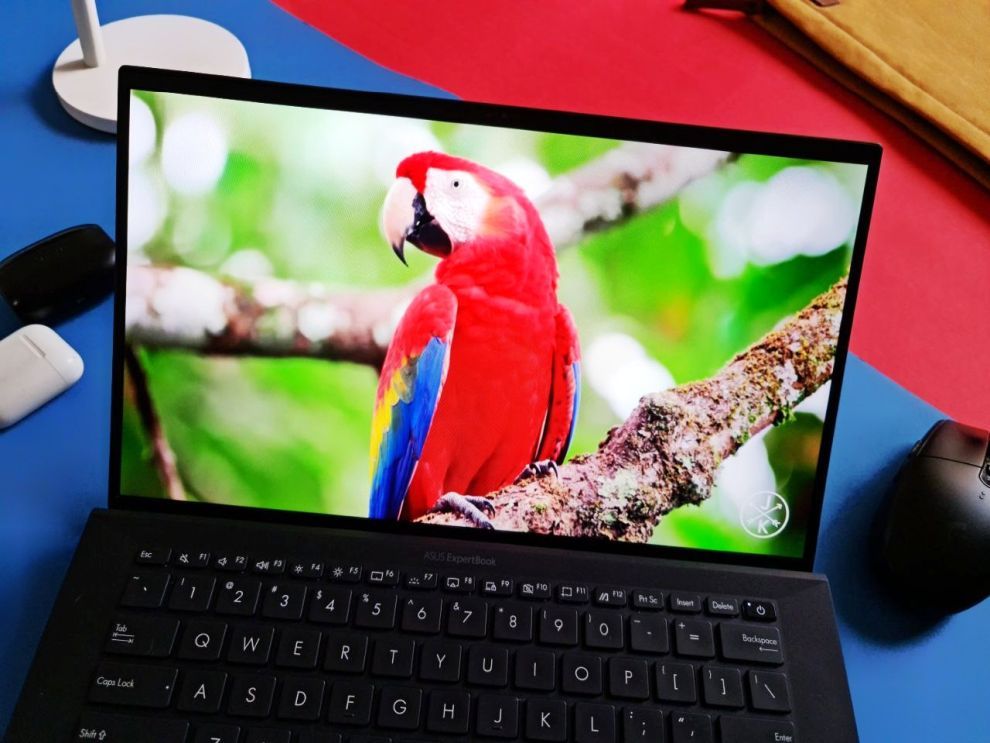 The display is surrounded by minimal bezels on all four sides. Even the bottom bezel is completely hidden as you fully open the laptop, thanks to the ASUS ErgoLift design. The top bezel is also just thick enough to house a webcam which comes with a physical privacy shutter and an IR sensor for quick Windows Hello facial login.

ASUS is selling two battery variants of the laptop - one with a 33Whrs battery and the other one is the 66Whrs battery that we reviewed. We highly recommend you go for the 66Whrs variant for a better life. On PCMark 10's battery test, the ExpertBook B9400 lasted for 839 minutes at peak brightness. It managed to beat pretty much every other laptop in this category that we have tested here at Digit. 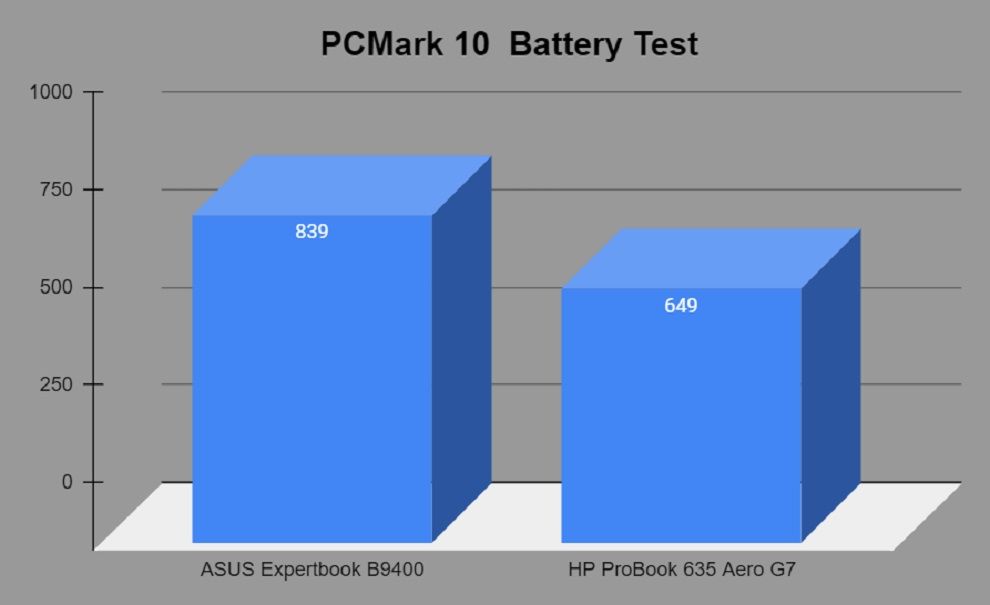 Real-world usage also reflects similar numbers and you should be able to get 10+ hours of usage every day without any issues. In fact, you can also reduce the screen brightness to get more usage out of the laptop. The ExpertBook B9400 excels when it comes to battery life and you will not be disappointed.

The ASUS ExpertBook B9400 is a feature-rich laptop. For starters, we really like the keyboard and the trackpad on this laptop. Despite the small form factor, the keyboard doesn't feel cramped and the keys have sufficient tactile feedback and a good amount of travel. It's very easy to get used to the keyboard.

The touchpad on the ExpertBook B9400 also acts as a numpad thanks to the ASUS NumPad 2.0. It is essentially a virtual number pad that makes it very easy and intuitive to use. 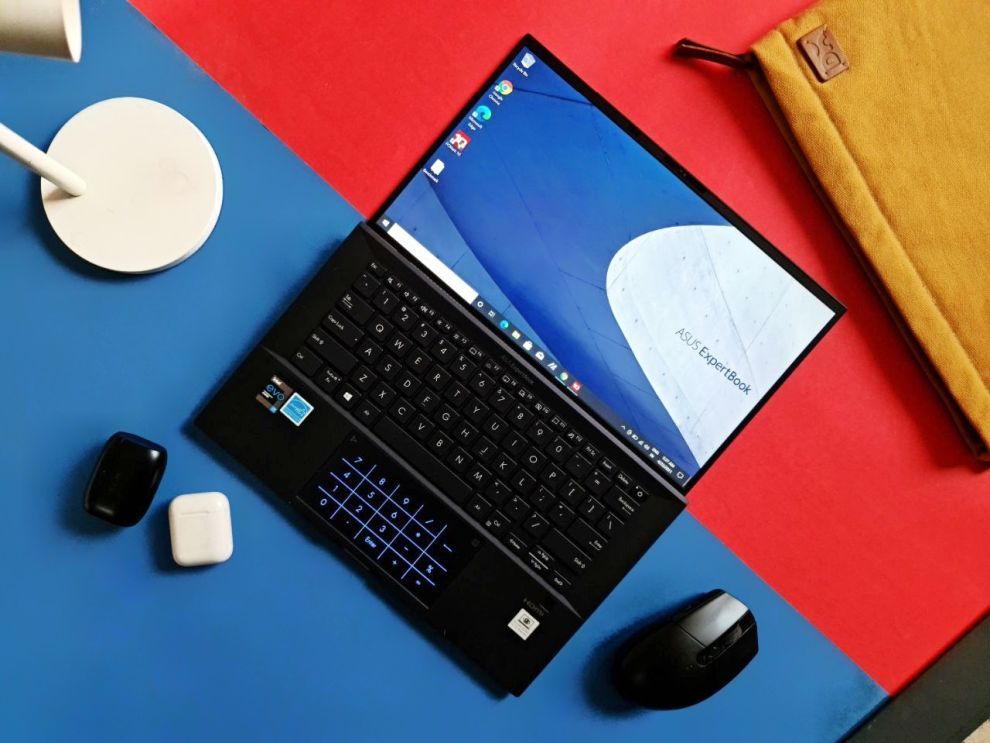 The ASUS ExpertBook B9400 also has plenty of ports on offer on a chassis that's smaller than most other laptops in this category. On the left side, you get two USB-C 3.2 Gen2 ports with Thunderbolt 4, an HDMI port, and a micro HDMI port that can be used as LAN via the micro HDMI-to-RJ45 adapter that's included in the box. On the right side, you get an audio jack, a USB-A 3.2 Gen2 port, and a Kensington lock.

ASUS also says the ExpertBook B9400 has passed MIL-STD 810G military-grade standards and the build quality speaks for itself. In addition to a beautiful design, it's safe to say that the laptop is also well built and it shows no signs of flimsiness which is usually a given for a laptop this thin and light.

The laptop has an exquisite design and the 'Star Black' colour variant makes it look like a sophisticated piece of a machine designed for a professional setup.

Is the ASUS ExpertBook B9400 worth buying?

The ASUS Expertbook B9400 is ASUS' best ultrabook to date. The ExpertBook B9400 doesn't compromise on any important aspect despite weighing as little as it does. It's compact, has a stellar build quality, offers plenty of ports on the sides, and packs powerful hardware to handle strenuous work without breaking a sweat.

The ExpertBook B9400 also shines with its battery life. It lasted for as long as 13+ hours on PCMark's battery test. The only complaint we had with the laptop has to do with its speakers. They are tuned by B&0 and the audio quality, even though is crystal clear, sound very low. They are bottom-firing speakers and we think a better placement could have made it better. But besides that, the ExpertBook B9400 is worth buying and it leaves very little to complain about.

The ASUS ExpertBook B9400 is a very reliable ultrabook that doesn't compromise on any important aspect despite the form factor.

No, the ASUS ExpertBook B9400 sports a 14-inch FHD IPS panel. It opens up to 180-degree but there's no touchscreen support.

Laptops Alternatives In This Price Range

If you are looking for the latest and upcoming laptops in India to buy or upgrade, you have come to the right place. There are a number of options that are in the Indian market...

Asus India has launched the Space Edition (SE) of Asus Zenbook 14X OLED. This special edition laptop dons a unique look with a secondary nameplate-like display on the lid. It’s a 3.5-inch OLED panel that...