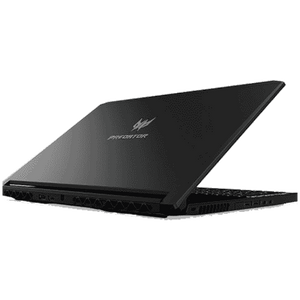 The gaming laptop is powered by the 2.8GHz 7th generation Intel Core i7-7700HQ processor with NVIDIA GeForce GTX 1080 GPU. It has two 512GB NVMe PCIe SSDs in RAID 0 configuration and 16GB 2400MHz DDR4 RAM which is upgradeable up to 32 GB.

The Predator Triton 700 comes with AeroBlade 3D metal fans and Nvidia’s Max-Q technology which is known to increase the airflow by 35% compared to conventional fans. The Acer gaming laptop comes with Dolby Atmos surround sound and Acer TrueHarmony audio technology.

The laptop comes with a plethora of connectivity options including dual-band Wi-Fi with 2×2 MIMO technology, Bluetooth v4.1 and Thunderbolt 3 connectivity which ensures speeds up to 40 Gbps and dual 4K video output. The slim notebook also comes with two USB 3.0 ports, one USB 2.0 port, an HDMI 2.0 port, one DisplayPort connector, and a Gigabit Ethernet port. The gaming laptop is backed by a 4670mAh battery that can deliver up to 5 hours of battery life.

There's no shortage of convertible ultrabooks in the market as a lot of OEMs have an assortment of laptops in a variable price range. But Acer just decided to step up its game and go...

Acer Predator Helios 300 gaming laptop has officially launched in India powered by upto NVIDIA RTX 3070 GPU and 240Hz refresh rate display. With its configuration set, the Helios 300 is capable of driving through...

Acer's Nitro series is extremely popular among gamers mainly because of the kind of performance it brings to the table at a relatively affordable price point. The company already has a bunch of different variants...

Acer's Nitro 5 gaming laptop is one of the most popular machines in the country and it's no surprise that Acer is keeping it updated with fresh new variants. The company has launched two new...