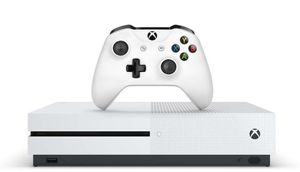 One can’t ignore the fact that the console is a year late to launch in India, which means that if you wanted an Xbox One S, then you probably already got it through other sources. If you are looking to buy one, you can get it cheaper in the grey market without warranty. If raw performance is what you are looking for, then you may want to hold your horses for the Xbox One X. Sony’s PS4 Pro is already available in India at an MRP of Rs 38,990 and if you know where to look, you can get one without warranty for around Rs 33,000. If you have the original Xbox One, then upgrading to the Xbox One S isn’t necessary as the upgrade isn’t significant. You may want to hold off for the Xbox One X or consider the alternative.

like Game DVR and in-home streaming to Windows 10. You will be able to play console exclusives like Forza Motorsport 7, State of Decay 2 plus blockbusters like Madden 18, Middle-earth: Shadow of War, Crackdown 3, Minecraft, and FIFA 18.1. The Microsoft Xbox One S 500GB Console comes with a 1 Year Warranty.

Gamers will be able to play popular Xbox 360 games and enjoy exclusive offers like Xbox Game Pass which gives you unlimited access to over 100 great Xbox One and Xbox 360 titles.

In the box you will get the Xbox One S 500GB Console, 1 Xbox Wireless Controller, full game download of Forza Horizon 3 for both Xbox One and Windows 10 PC. There is an HDMI cable (4K Capable) and AC Power cable. Xbox is also giving a 14-day Xbox Live Gold Trial as a promotional offer.

Top 10 Gaming In This Price Range

So, the PS5 (review) finally went up for pre-order in India on January 12, but wouldn’t you know it, the consoles were sold out within minutes. It was a little unexpected but considering this was...

Cyberpunk 2077 has been one of the most anticipated games ever and its launch was met with massive disappointment. Sure, if you are a PC gamer, then the only issue you had with the game...