Lenovo’s Star Wars Jedi Challenges AR Kit: Be one with the force 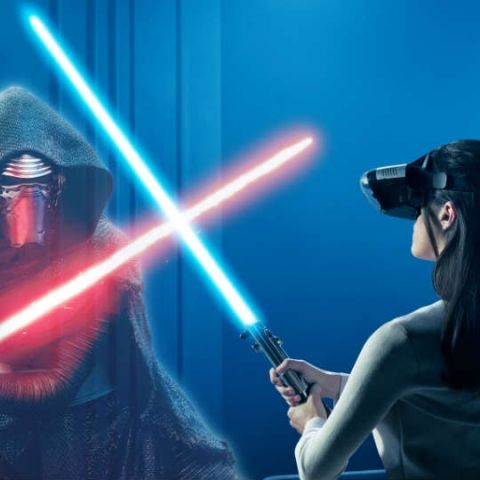 Whether the Yoga 920 or the Moto X4 was Lenovo’s best product at IFA is open to debate. There is no doubt however that by far the coolest product this season was the Star Wars Jedi Challenges AR kit. Comprised of the Mirage AR headset, tracking beacon, a phone app and an actual frigging lightsaber which lets you fight Darth Vader himself, this is any Star Wars fan’s wet dream. We experienced the product first hand and while this is an experience worth having whether you a fan or not, we are not very sure how the product will be repurposed once the content runs dry.

That said, Lenovo assured us that at launch, at least 8-10 hours of gameplay will be available for customers and Lenovo and Disney are working on newer content as well. Anyway, we had the chance to play with it at its IFA launch and these are our initial thoughts. 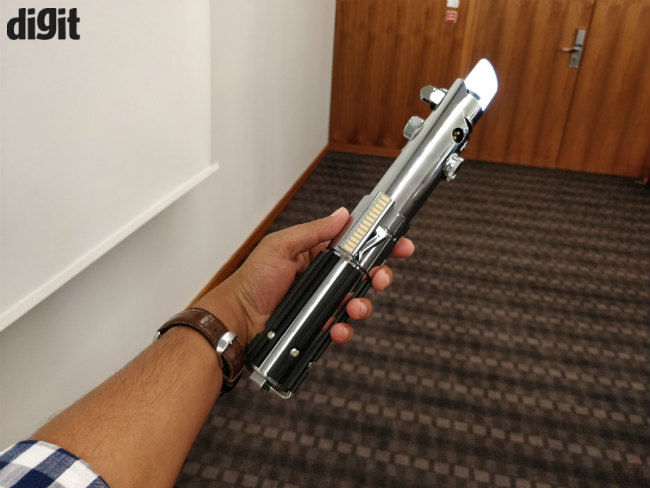 In an AR experience such as this, the headset is quite important, but according to us, the coolest thing is the light saber aka the controller. Lenovo has done a decent job creating a life size replica of the lightsaber used by Daisy Ridley’s Rey in The Force Awakens. It has a metal casing, with rubber grip slits at its hilt. There are two adjuster knobs just like the one used in the movies and you even sync the thing up by pressing the activation plate. It is not heavy or very light, but at 275g seems rightly weighted. As for where the blade should be, there is a short stub with a blue tip. Rest of the sensors required are in the hilt, including the gyro-sensor. 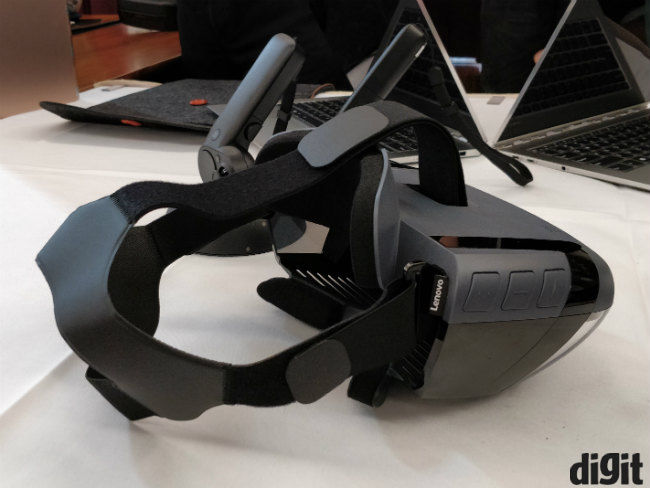 The second piece of this AR puzzle is the Mirage headset. Unlike Lenovo’s mixed reality headset, the Mirage headset is smartphone powered and currently supports only a handful of devices. We were given a demo with the Moto Z and our experience was quite smooth. While the phone is running the app, the headset is feeding information into it using the two inside-out positional tracking cameras on either side of the headset. The headset works by reflecting the digital images coming from the smartphone display onto the perspex screen inside the headset, creating an AR experience. It is not class leading or completely immersive as the field of view is quite narrow. However, since the entire bundle costs just $199, there is little reason to complain about the AR quality of the headset. In fact, compared to Microsoft’s Hololens, the Mirage has much better FOV. Also, the quality of AR will also differ from phone to phone.

The setup we saw seemed quite simple as you slide in one of the supported phones into a slot above the headset and connect it to the headset. After that, we placed the beacon, did some fine tuning of controls as given in the manual and voila, you can start swapping plasma dust with your opponents from the Dark Side.

Gameplay
As we mentioned, initially at launch, the Jedi Challenges game will have about 8-10 hours of content. You can match your fighting skills against likes of Kylo ren, Darth Maul and more. In the demo, we played against Kylo ren. It had its aggressive fighting style and Lenovo says that each of your opponents will have its own set of unique moves. There is also an increasing level of difficulty as you progress through the game. You will also learn to use the force, which will work with the buttons given on the saber itself. The overall gameplay (at least from what we saw) is heavily guided. However, to be safe and work more effectively it has to be, otherwise, how would you know where your blade is.

What the future holds?
While this is quite a toy and definitely one of those things which is a must have for Star Wars fans, what will make it much more interesting though is how this whole setup can be used in the future. The current idea is to bring those unforgettable Star Wars characters alive and let you test your skills against them. However, once you start running thin on this content, what then? We asked Lenovo officials about the same and we were given a vague answer that it will have more content. In addition, users will able to play against each other very soon as the technology or rather things required to do so are already in the works.

There is no official word if or when Lenovo will launch Jedi Challenges in India, but one thing is for sure, if they do a lot of Star Wars fans will be happy