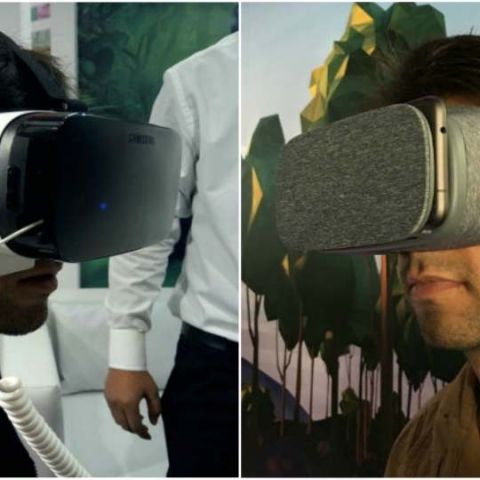 Google has launched the Daydream VR headset in India today. The device is Google’s first attempt at a proper virtual reality headset, moving ahead from its DIY-style Google Cardboard. While the Daydream View VR is not a new headset, it has only just made its official entry into the Indian market where consumers already have a variety of VR headsets to choose from. The most notable among them, and the one that will pose as Daydream View’s direct competitor is the Samsung Gear VR. Samsung already has an advantage over Google as the company launched its virtual reality headset in India way back in January 2016. Google, on the other hand, is almost a year late with its VR headset launch in the market, and will have to work extra hard to make its mark on the country’s small, but growing Virtual Reality user base.

So, what is the difference between Samsung’s Gear VR and Google’s Daydream View VR headset? Here’s a quick comparison of the two mobile-based VR headsets.

The Samsung Gear VR is compatible with select Samsung phones only. These include - Samsung Galaxy S6, S6 Edge, S6 Edge Plus, Note 5, S7 or the S7 Edge, S8 or S8 Plus. The Daydream View, on the other hand, also has limited compatibility with devices like the Google Pixel, Pixel XL, Moto Z, ZTE Axon 7, Zenfone AR and more. However, Google has said that Daydream support for the Samsung Galaxy S8 is coming soon and that the device will also open up support for other Android smartphones in the near future.

The Samsung Gear VR boasts of a large VR app library, with hundreds of supported apps, while the Daydream View has a few good apps in its kitty. That said, the Daydream offers YouTube’s extensive library of 360 degree videos, Street View, Google Play Store, a number of VR games and other content viewing apps.

Google’s Daydream View is bundled with a motion controller, which is great for gaming and other interactive experiences. The Samsung Gear VR available in India, though, is not accompanied by a controller. However, Samsung did update the headset back when it announced the Galaxy S8 phones. The new Gear VR headset does come with a motion controller, a new interface and customisable avatars. Samsung says the new controller will help reduce head movements during VR experiences and give users more room to interact with games. This new headset is not yet available in India.

The best part about the Daydream View VR headset is that the center position can be realigned after you sit in a comfortable position. Let’s say one want to sit down or lie down and change the center position of the headset. This can be done by firstly changing one’s position and then with the simple hold of a button, re-center the headset. There is no need to to get out of the app or reset the headset like one has to in the Samsung Gear VR. In terms of light-bleed, the Daydream does allow some light to enter the headset, whereas that is not much of a problem with the Gear VR.

The Daydream View VR is priced at Rs 6,499 and can be purchased via Flipkart. The Gear VR, on the other hand, can be purchased at Rs 3,999, making its price significantly lower that Google’s headset. The new Gear VR with the motion controller can also be bought from Amazon India’s Global store at Rs 4,472, which is also cheaper that the Daydream View. That said, Google is also known to be working on a standalone Daydream VR headset which will not require a phone or a PC to run VR experiences.

Stay tuned to Digit.in for a complete review of the Google Daydream View headset