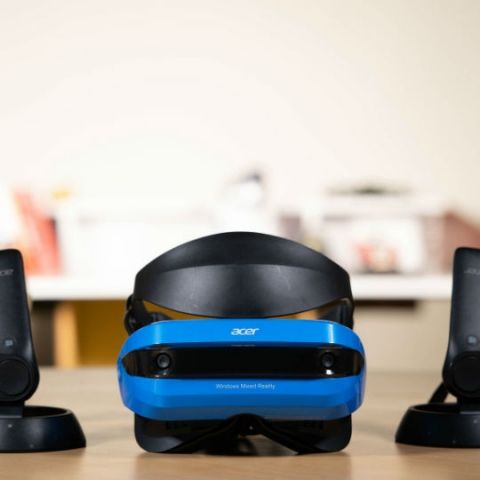 We had a chance to spend some time with the Acer Mixed Reality headset. Here are our thoughts on the device. It is available online for Rs 38,990.

Kicking things off with the build of the headset itself, it is made of plastic. The front has a mix of blue and black and the placement of the front cameras look like a pair of eyes on an old robot. It isn’t the slickest looking headset around, but it is functional. Putting on the headset is as easy as placing it on your head and rotating the headband wheel.  If you have worn a PSVR headset in the past, then putting this on is the same. 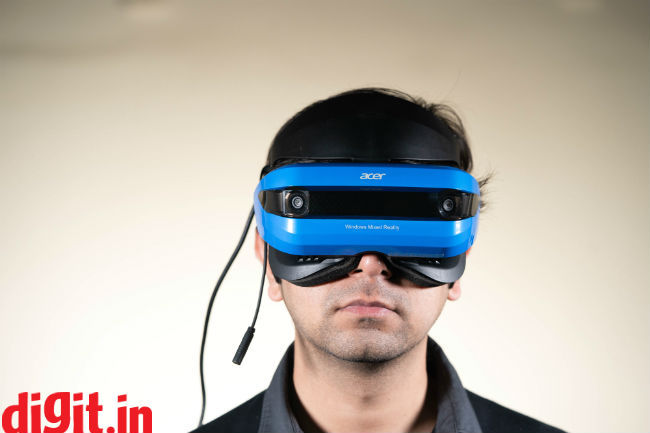 The Acer MR headset fits snug. You can lift the front portion of the headset to get a glimpse of the real world and this mechanism is the same as lifting the visor of your helmet. Even for someone like me that wears big glasses, the headset fit comfortably enough for use. There was some light bleeding into the headset from the bottom but if the room you use it in isn’t very well lit, this can be avoided. 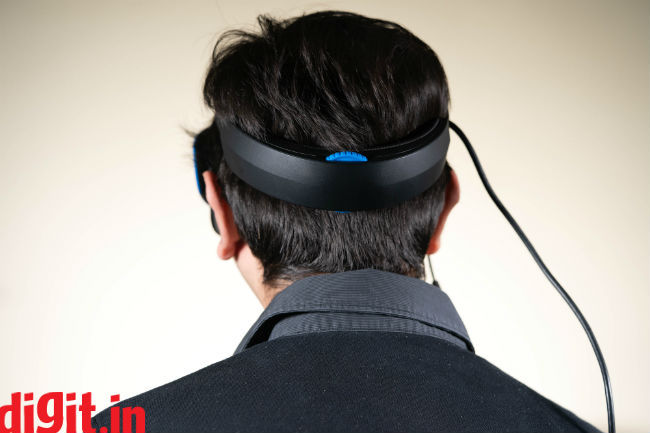 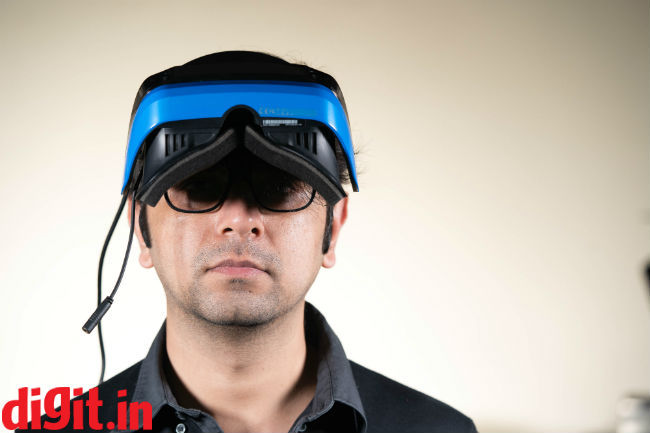 The inside of the headset has two 2.89-inch LCD displays with a 95-degree field of view. The headset has a resolution of 2880x1440. There is foam all over the place to give you a comfortable fit when you wear it. When I wore the headset, the foam around the nose felt a little tight for me. This could be because I have a big nose. After prolonged use, you do feel like taking it off, so you can take a deep breath with your nose.

Speaking of prolonged use, I had the opportunity to test this headset in the summers in Delhi and the air conditioning wasn’t always on. It can get quite warm in the headset if you don’t have an airconditioned room so that’s another thing to keep in mind. When gaming on a keyboard and mouse or a controller, it is easier to deal with sweaty palms than it is to deal with a sweaty face.

Overall, the build of the headset is functional, but it isn’t perfect. It is still tethered which means you will have wires hanging between the headset and your PC. Also, when compared to other headsets in the market, the Acer MR feels like a budget device.

Moving to the controllers, they are quite ergonomically designed and comfortable to hold. From the triggers, to the analogue sticks and even the button that’s on the side of the controller, all are easy to reach. Each controller has a large ring on which you have the glowing LED lights that communicate with the headset. The controller is made of plastic and can feel cheap, especially if you flex the housing of the ring. The controller also runs on AA batteries and I wish it had built-in batteries with USB charging making those midnight gaming sessions possible without having to step out to find batteries. During our testing, the battery didn’t run out. However, online forums reveal that a good pair of batteries can last for up to 10 hours. Off the shelf rechargeable batteries can give you about 2 to 5 hours depending on quality and use. Considering this, we recommend having a few batteries in spare. 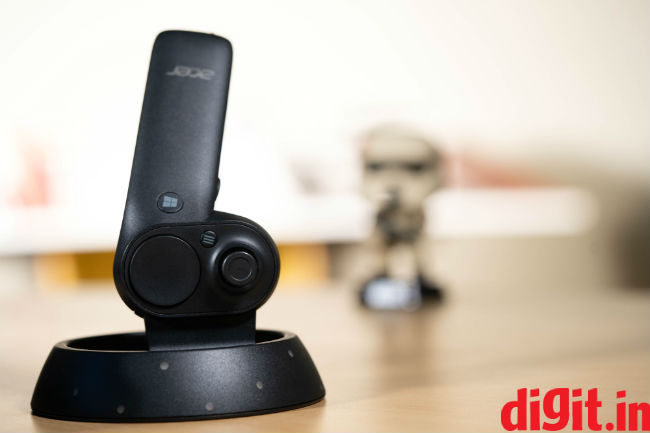 Overall, the controllers are ergonomic, functional and get the job done well with the only drawback being that they don’t have a built-in battery.

Setting up the Acer Mixed Reality Headset is as simple as plug and play with the only glitch being the Windows mixed reality setup app. You can connect the headset to the HDMI and USB port of your gaming desktop/laptop fire up the Windows mixed reality app and you are good to go. When setting up, you will have the option to walk about and set a perimeter or use the headset sitting down. I highly recommend using the walk about setup as this is where the functioning of the headset shines. For testing the headset, we used the Acer Nitro 5 - Thanos Edition. Under the hood, the laptop is powered by the 7th Gen Intel Core i5-7300HQ CPU, 8GB of DDR4 RAM coupled with the Nvidia GeForce GTX 1050. The headset worked on the laptop however, we recommend that to get a lag free experience, you should run the headset with a GTX 1060 at least. The Windows MR app also checks the compatibility of your PC hardware with MR so that’s a nice way of checking whether your system will be able to perform before investing in a headset.

Towards the end of the setup you will get a notification which says that the setup is almost done, and some files are being downloaded for the MR headset. This is where I saw a bunch of windows machines hang and stay stuck to this screen for a very long time. It could a bug in the machine or the app, but it was one we faced constantly, and it was a pain getting past this point. I couldn’t figure out a reason why this was happening. Ultimately, it took several restarts and retries to install the MR software on the laptop to get it running. 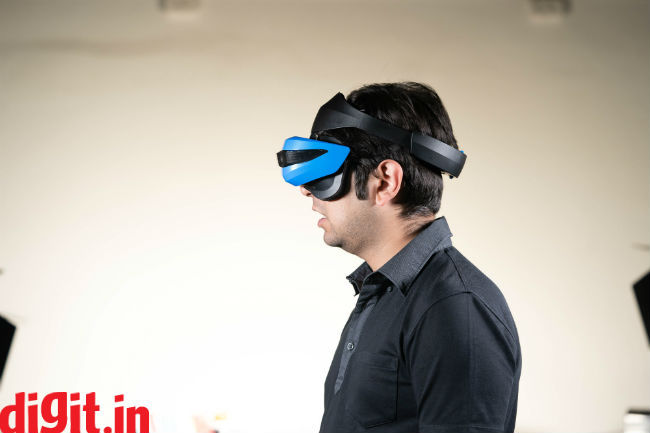 Considering the fact that you can walk around a small space and have full wrist motion with the controllers is impressive when you look at how minimalistic the setup is. It is quite simply plug and play when compared to the room scaling setup of the HTC Vive. Another advantage of the plug and play nature is that you can easily carry the headset and controller with you in a bag.

When you press the Windows button on the controller, you will be transported into a home in the virtual world that will give you access to the Windows MR store, Steam VR (if you have it installed) and more along with the ability to move around this virtual living space with a simple point and click of your controller. Its quite interesting. You can watch your movies in the MR headset, but I found the experience quite gimmicky.

Where the headset shines is with the games. We played a bunch of games on Steam VR and they are a lot of fun. Beat Saber is a game where each controller is a Light Saber and your objective is to destroy all the obstacles that come your way. The level is designed around music hence the name Beat Saber. The game also recognises your body’s motion. Sometimes you are required to duck and step aside from an oncoming projectile that you can’t destroy. The game is quite the workout and reminded me a lot of games I played on my Nintendo Wii.

One of my favourite games on the headset was Space Pirate Trainer. You wield two guns in your hands and you can customise the ammo you use (rapid fire, grenades, etc.) using the analogue sticks and the triggers are used to fire. You can also duck out of the way to avoid incoming fire. This is by far the most fun I’ve had playing a VR game. The action is faced-paced, the controls are swift, and accurate and the visuals are immersive. Using a rapid fire gun in one hand and a grenade launcher in the other made me feel like a space pirate version of John Wick! 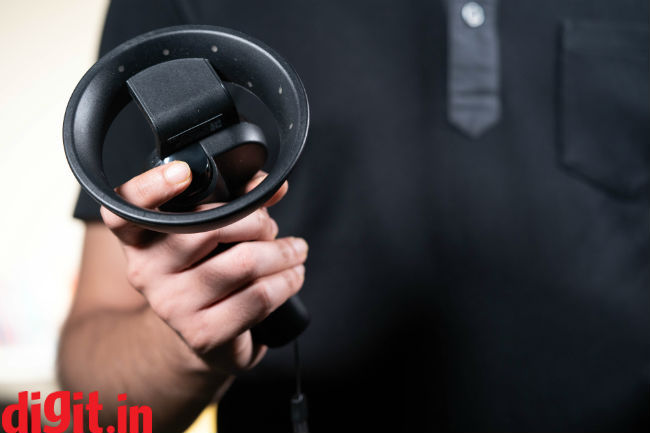 Once again, playing the game feels like a workout and the maximum play session I had was for about 30 mins, after which I had to stop either to catch my breath, give my eyes a break or simply, sit down (I think I’m getting old).

Performance of the games in terms of graphical fidelity, framerate and more depends on the performance of your PC, so it wouldn’t be right to talk about it here. Coming to the visuals of the display inside the headset it is good but not the best. You have a high enough resolution to enjoy games however, the movie watching experience wasn’t very comfortable for me. I felt a kind of screen-door effect when watching movies. The effect wasn’t as prominent when playing games. For gaming the display’s resolution is high enough not to feel pixilated and the hardware of your PC will have a lot to do with the stability in framerate. In our case, since we ran it on a laptop, when the laptop was plugged in, the games saw very little frame drops. However, running the laptop on the battery, the games saw significant more stutters.

The beauty of the controllers is that they will detect even the slightest movement of the wrist making the gameplay all the more immersive. The headset and controller work with something called inside out tracking. This means that you don’t to have sensor all around you to detect your movement. The camera in the headset detects the movement of the controller. The LEDs on the controller are used to communicate with the camera on the headset. The biggest question that arises is what happens if you put your hands behind your head, to say, pull an arrow out of a quiver. To this Microsoft has said that the MR headset can estimate the movement to simulate it smoothly. In our experience, we didn’t need to reach behind our head in any of the games, but yes, the tracking does waver slightly when the controller is out of view.

Steam now supports the MR platform, so you will see an icon next to the game if it supports an MR headset.

There is one thing to note - as of writing this story, there are no Mixed Reality apps that I could find. And by mixed, I mean the ones that mix the real world with the virtual world to give you the kind of experience seen on the HoloLens. 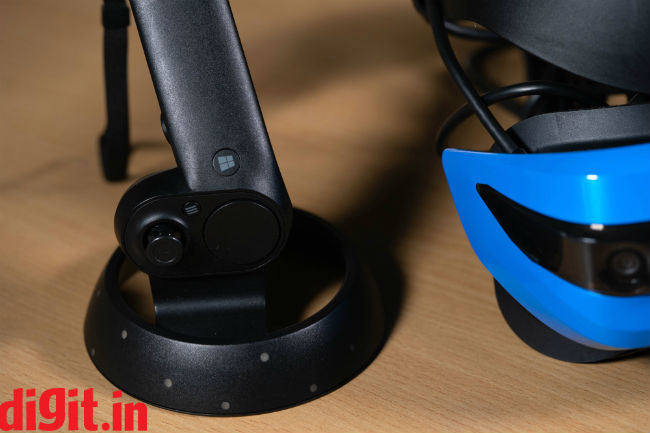 Is the Acer Mixed Reality Headset worth Rs 40,000? Well, if you already have a gaming PC that supports it and are looking to invest in a VR headset, then yes, it is worth it. The library of games available for VR is decent enough to enjoy the headset and the games aren’t very expensive on the Steam VR store. The inside-out tracking works well on the controllers, and there is almost no lag when playing fast paced games. The build quality of the headset can feel cheap. It isn’t the most comfortable one out there, especially for prolonged use. It is however a decent investment to get a feel of VR gaming and entertainment at home. It isn’t Ready Player One, but we’re on the right path to get there. 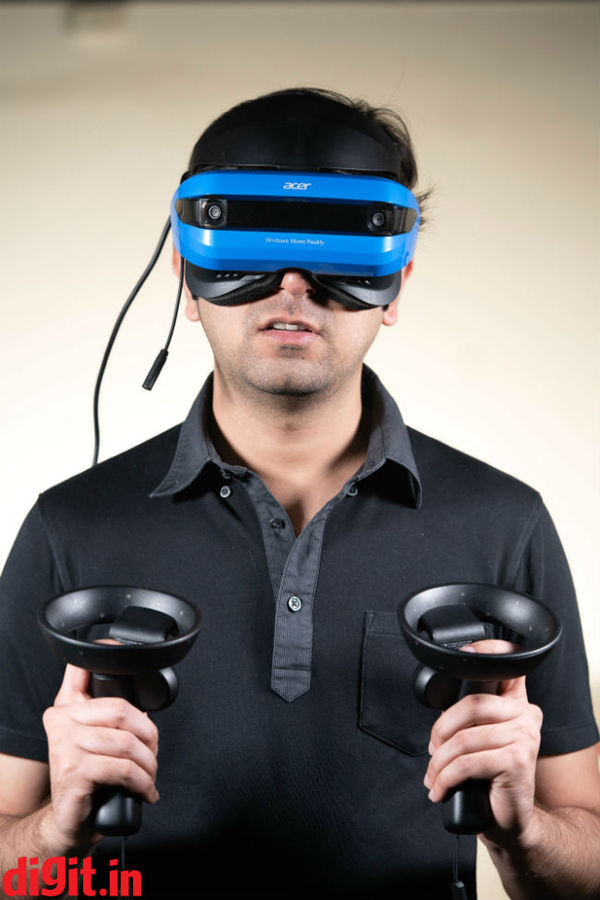