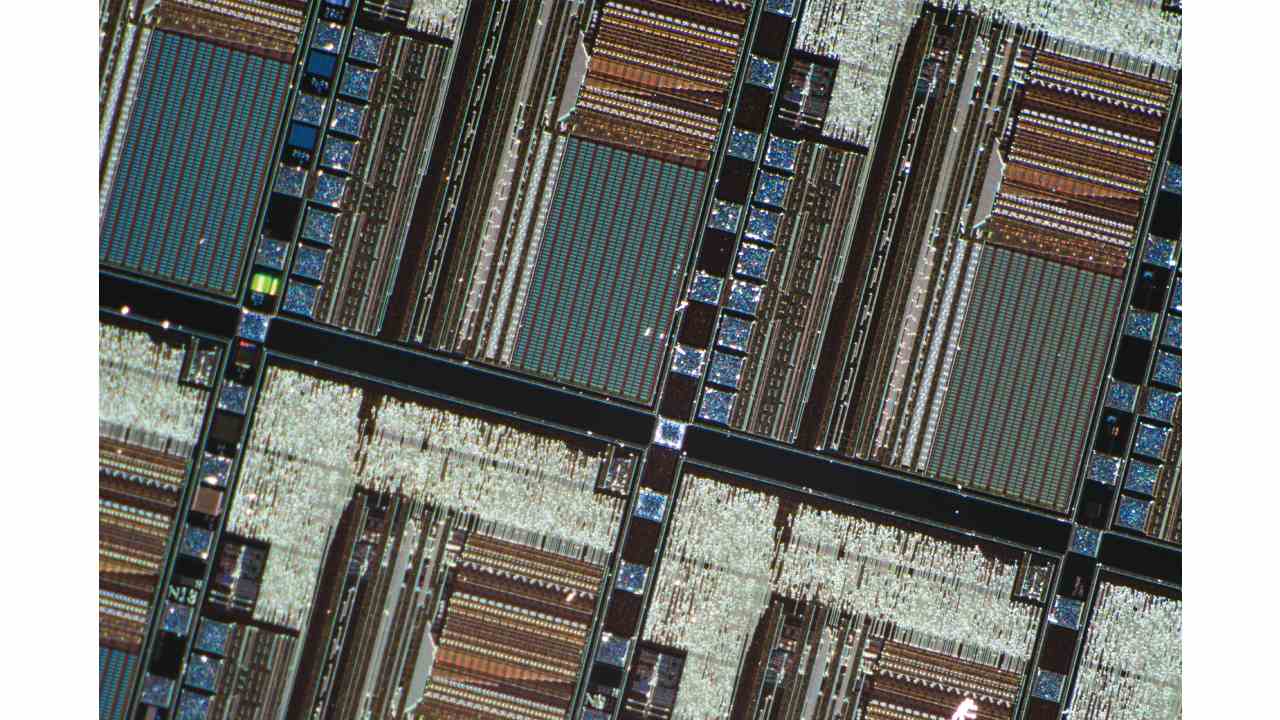 The origins of the transistor

Modern computers are continually revolutionising our lives by performing tasks that were deemed almost impossible decades ago. A long array of innovations has allowed modern computers, as we know them today, to come to pass. However, there’s one foundational invention that almost everything else relies upon. The humble transistor. Let’s see how this inconspicuous device came to be.

The need for transistors

At their very core, all computers are fundamentally machines that perform mathematical operations. The earliest ones were manual counting devices, such as the abacus, while the ones developed in the future utilised mechanical parts. What made these devices ‘computers’ was having a way to successfully represent numbers and a system to manipulate the numbers. Electronic computers work the same way, however, instead of physical arrangements, the numbers are depicted in electric voltages. Boolean logic, that has only two possible values – true (1) and false (0), comes to play in electronic computers. In electronic computers, equations are performed via logic gate circuits that produce an output of 1 or 0. For more advanced operations, these circuits are fused together. Computer programs consist of sets of instructions which detail how to perform these operations. However, this system needs a reliable and accurate method for controlling the electric current. 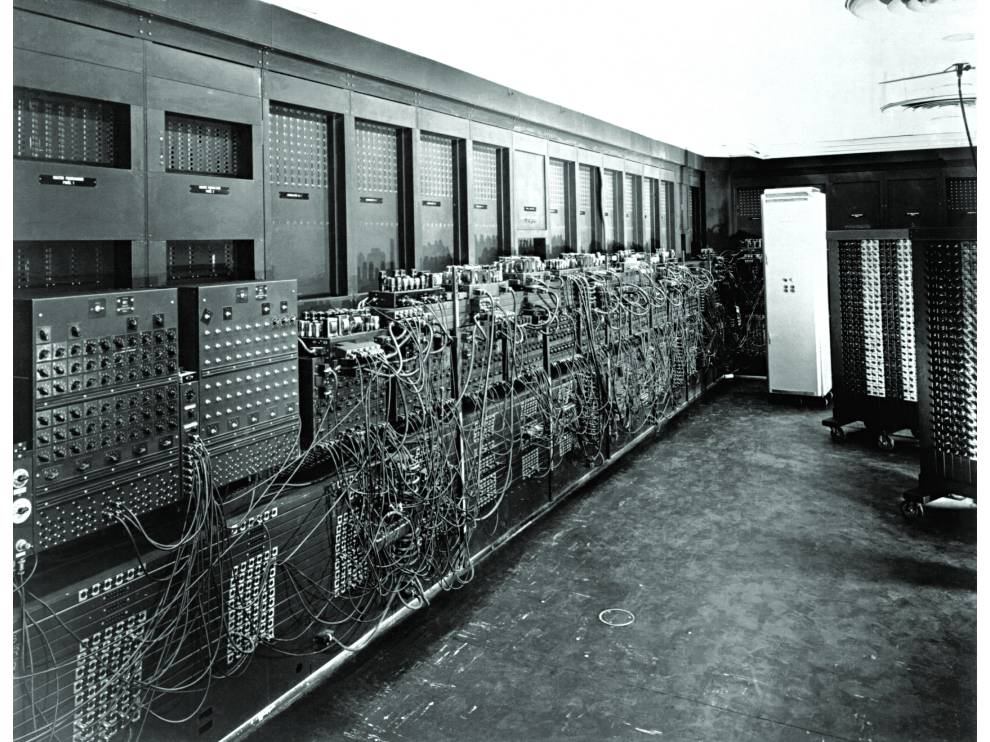 Early electronic computers such as the ENIAC (Electrical Numerical Integrator And Calculator), developed in 1946, used a device known as the vacuum tube to control the electric voltages. Vacuum tubes used in such computers were bulky and unreliable. They also consumed absurd amounts of power and generated too much heat which, in turn, shortened the lifespan of these tubes. The transistor, on the other hand, was much smaller and used considerably lesser power than the vacuum tubes. Also, since the transistor used lesser power, the amount of heat generated is minimal. Therefore, it doesn’t fail quite as often as vacuum tubes. The transistor uses a semiconductor instead of electrodes which were used in vacuum tubes. A semiconductor such as silicon is treated with different elements such as phosphorus and boron to create an electron-emitting ‘N-Type’ and an electron-absorbing ‘P-Type’. These are arranged as N-P-N (typical NPN transistor), with a terminal placed at each – the emitter, the base and the collector. In such transistors, small variations in the input voltage can be used to rapidly switch between high and low voltages. The transistor has allowed the development of modern-day computers. ENIAC was a massive computer which weighed a whopping 30 tons and was the size of a tennis court! In contrast, ENIAC’s functionality can now be surpassed by a single, fingernail-sized microprocessor containing billions of transistors.

The drive towards an alternative solution

In the 1920s, researchers  began investigating the use of semiconductors for amplifying and switching signals in telephonic devices. In the 1930s, Marvin Kelly, an American physicist and engineer, at Bell Labs decided to pursue creating some form of a solid-state device. He decided to challenge a number of colleagues such as William Shockley, Jack Scaff, Russell Ohl and others to investigate semiconductor technology to replace the vacuum tubes. He knew that the vacuum tubes were far too unreliable to be the ultimate answer to seamless electronics.

Russel Ohl began looking into silicon crystals and how the preparation of silicon crystals could influence if you get an N or P-type silicon. The direction in which the rectification occurred defined the type of the silicon. Ohl was also able to develop a sample where the top part was a p-type region while the bottom was n-type. He found that when the light was shone onto this, it developed a voltage. In 1945 after the World War II, Shockley began experimenting with improved semiconductor materials that were developed for radar detectors used in the war. He investigated a field-effect amplifier, one that was similar to concepts patented by Austro-Hungarian physicist, Julius E. Lilienfeld in 1926 and German physicist, Dr Oskar Heil in 1934. The concepts created by these two physicists failed to work as intended in the past. However, the breakthrough came when physicist John Bardeen suggested that the electrons present on the surface of the semiconductor could be obstructing the penetration of electric fields into the material. Along with William Shockey’s support and the assistance of another physicist, Walter Brattain, John Bardeen began researching the behaviour of these ‘surface states’.

By late November 1947, Bardeen and Brattain managed to create a working transistor, a crude one which they continued to improve until December 16, 1947. On this day, their research finally culminated in creating a working ‘point-contact’ transistor made out of two gold foil contacts sitting on a germanium crystal. It was also known as the ‘PNP point-contact germanium transistor’.  They made a circuit to demonstrate the working solid-state device to Bell Labs on December 23. Bardeen and Brattain also spent some time filing patents for their invention and clearing it for public release with the military. In June 1948, Bell Labs officially announced the revolutionary solid-state device which they called a ‘transistor’. 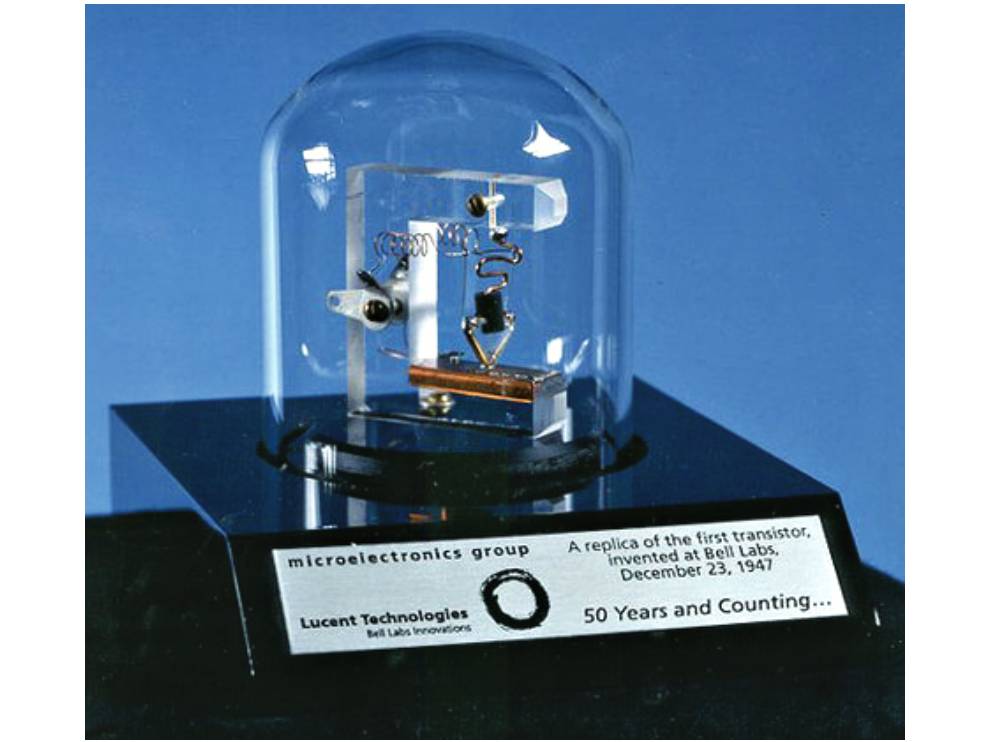 Shockley, however, went on to building a more reliable and reproducible version of the first working transistor created by Bardeen and Brattain. He was successful and introduced his bipolar junction transistor in 1952. It was made from a solid piece of semiconductor material with no point contacts. This invention was superior to the point-contact type and replaced it by dominating the industry for the next 30 years. He applied for a patent for the transistor effect and a transistor amplifier as well. In 1956, all three Bell Labs physicists, William Shockley, Walter Brattain and John Bardeen were awarded the Nobel Prize in Physics for their contributions.

The junction transistor was first used in a commercial product, a Sonotone hearing aid, in 1952. Following this, in 1954, the very first transistor radio, the Regency TR1 was manufactured. Different manufacturing methods were constantly being developed to produce faster, cheaper and more reliable transistors. Another important advancement was the silicon transistor made in 1954, first by Morris Tanenbaum at Bell Labs and shortly after that, by a team at Texas Instruments, led by chemist Willis Adcock. By the end of the 50s, silicon was the preferred material in the industry for manufacturing transistors and Texas Instruments became the dominant semiconductor vendor.

A start-up in Silicon Valley, California, created the Fairchild Semiconductor. In 1958, they introduced a double-diffused silicon mesa transistor which became a huge commercial success. Shortly after, Swiss physicist Jean Hoerni created a revolutionary planar process which transformed the manufacturing process of transistors from a semi-handcrafted operation to a high-volume automated production process. This also paved the way for the development of the modern ICs (integrated circuits).

In 1959, the ideas of Lilienfeld and Heil inspired a Korean electrical engineer, Dawon Kahng, to build the first successful field-effect transistor (FET) which consisted of layers of metal, oxide and silicon. The MOSFET (Metal, Oxide, Silicon field-effect transistor), often shortened to MOS, promised a much smaller, cheaper and lower power transistor. Companies such as Fairchild and RCA introduced commercial MOS transistors to the public in 1964. However, merely a decade later they were largely replaced by ICs in computers. MOS transistors, however, proved to be the most practical approach when it came to building high-density ICs. Now, billions of transistors that are manufactured every day are MOS devices.