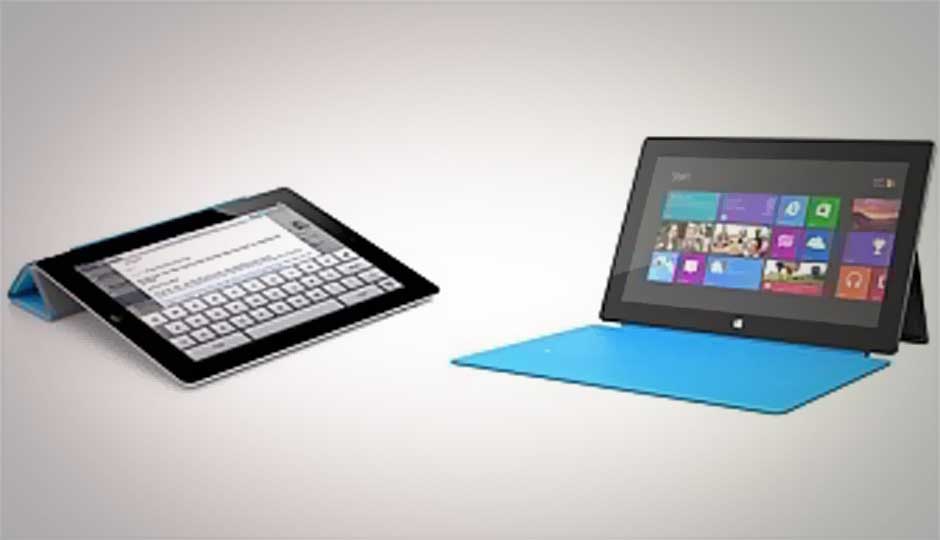 Now that pricing and models for Microsoft Surface (for Windows RT) is finally out, we can open the Pandora’s Box that is the speculative look at how it will do when pitted against the current reigning champion in the Tablet-verse, the iPad.

We’ve ogled the Microsoft Surface for Windows RT for a while and the Redmond giant has done a pretty good job keeping most of the specs under wraps, but no more! So here we take a look at the reigning champion and the new contender and how they stack up to each other.

What the iPad has going for itself
The iPad has been a revolutionary product from Apple that has found itself a spot in many homes and lives. It has come through 3 generations of iterations, with the newest one offering some pretty impressive features.

The Retina Display:
If you’re not impressed by the new Retina Display Apple has packed into the new iPad, then you’re probably not human. We’re not talking about utility here (there really isn’t any if you ask us), but that display is just so crisp and anyone who loves very high quality images will absolutely enjoy the display. Great for photographers, but not really necessary for an average user. In comparison, Microsoft Surface RT has a resolution of just 1366x768 pixels, which is nowhere close to the iPad’s 2048x1536 pixels.

3G, 4G, LTE and other alphanumeric Connectivity Options:
The iPad has always focused on connectivity, and each iteration has offered the best connectivity options it could at the time. The new iPad is packing in 3G and LTE chips, although LTE capabilities won’t be available everywhere in the world. In contrast, Surface only offers Wi-Fi connectivity, so if you’re someone who’s always on the go, 3G connectivity is not an option.

More Apps than your iPad has Room For
Currently, the App Store has close to 650,000 apps, with half a million having been designed specifically for the iPad. That’s more apps that the 64GB version of the iPad can hold. The App ecosystem for the iOS is currently the largest, with most developers focusing primarily on this established platform. One of the biggest drawbacks of the Windows Phone eco-system has been the lack of apps. Many presume that this disinterest amongst developers for developing apps for Windows RT would continue, crippling the new OS.

Microsoft Surface will offer a tough fight to the iPad
The iPad is a great device. It has gone through an evolution and not only kept up with the times, but also delivered a user experience that is signature of Apple’s simplicity and elegance. However, we now have the Surface, which could give the iPad a run for its money. Here’s what we like about the Surface.

It’s a Space-Game
Surface RT comes in 32GB and 64GB flavors, with the cheapest version being roughly the same price as the Wi-Fi only 16GB model of the new iPad. If that wasn’t enough, Microsoft is also letting you slip in an additional 64GB MicroSD card, just in case you’re a space junky.

The Built-In Goodness
While you will need to buy a case to prop the iPad upright, Microsoft has just built in a kickstand into the Surface. Speaking of built in, there’s even a HD display port for connecting projectors and TVs along with a fully functional USB port. Good luck finding those on the iPad.

MS Office is a big plus
The Surface RT tablet, according to Microsoft, will ship with a baked in copy of Office RT. It wont be the final version, probably the Home or Student version of the popular productivity suite, but unlike greedy developers, Microsoft wants you to have the final version of Office RT for free when it is ready, sometime in the first few months of 2013. The way we see it, we're getting an entire Office Suite for free (well, one could argue the cost is included in the price of the tablet), but the fact that MS will allow you to upgrade for free is just mind-blowing. The last time anything "free" came out of the Cupertino office, that was of real use, was a Bumper Case for the iPhone 4 when their Antenna blunder was discovered.
Surface is Hardcore
Microsoft Surface RT is constructed out of Magnesium and topped off with Corning Gorilla Glass. The damn thing is so tough that Steven Sinofsky, Windows Chief, decided to put wheels on his Surface RT and take it out for a spin, Skateboard style. He even tweeted the images of said actions. When was the last time you didn’t treat your iPad like a newborn child?

Windows Surface RT has created major buzz at every stage of its public appearance, but it at the official launch, be it at the brief hands-on Microsoft offered to several tech sites or be it with the pre-orders. Windows 8, the OS which will be running on the tablet, albeit an ARM version, has already received a lot of positive attention from the media and techies alike, which instills many with the faith that Surface RT won’t be a flop. The design of the tablet itself is just beautiful, it weighs in under a kilo and comes with a cover that doubles up as a keyboard.

Many have said that a product from a company with a track record of problematic operating systems cannot compete with a company with a standing record of producing ‘exceptional products like the iPod, iPhone and iPad.” To such nay-sayers, we would like to point out that the Xbox 360 was also a purely home-grown product at Microsoft. While the console too was greeted with unprecedented skepticism, it has managed to give Sony a run for its monopoly in the Console market. So saying that Microsoft has a history of only mediocre products would be a wrong statement.

For us here in India, Surface RT could be something of a riot. If the basic version ($499 for 32GB without Touch Cover) is priced under Rs. 30,000, then it would definitely pose a very strong risk to the iPad monopoly. The 64 GB of the Surface RT tablet is $699, roughly Rs. 38,500 which is much lesser than the Rs. 42,500 of the 64GB iPad (wi-fi only) price tag. As long as Microsoft keeps the pricing somewhat lower than the competing iPad model, the Surface RT might become a major hit with the users here.

The new direction Microsoft has ventured in is one that instills us with a lot of optimism. We have been using Windows 8 Release Preview for months now and cannot wait to upgrade to the final version. We absolutely love our Xbox 360 and eagerly look forward to the day we get to play with our own Surface RT tablet.

Nokia launched the T10 Tablet for under ₹15,000: Here's everything you need to know
Microsoft to launch new Surface series of laptops on Oct 12
Apple could unveil new iPads, Macs, and a MR headset in its next event: When and what to expect
Microsoft re-introduces tablet-friendly taskbar in Windows 11
Apple may use hybrid OLED tech for future iPads
Advertisements