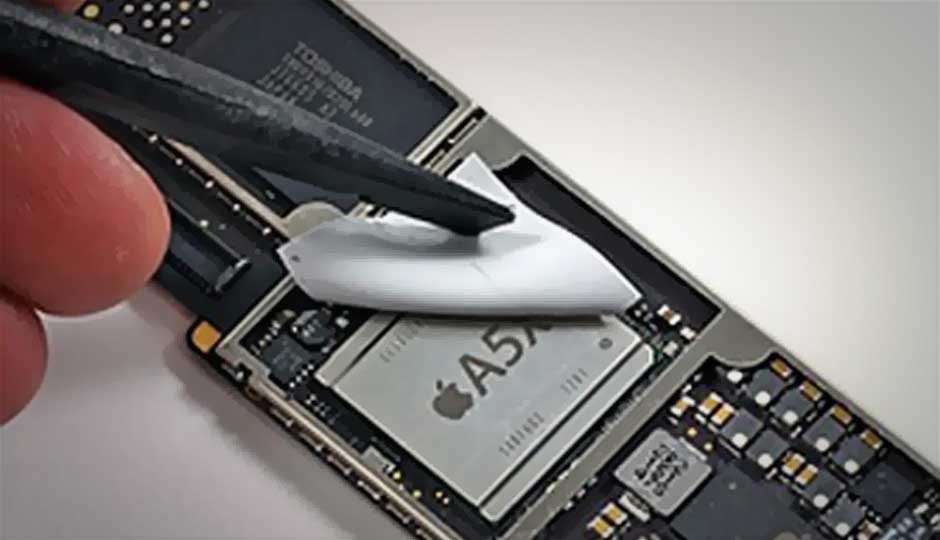 A trip to Australia helped iFixit land the new iPad this morning and the subsequent teardown reveals a Samsung-manufactured LCD and A5X processor, among other things.

Co-founder Luke Soules flew to Melbourne and was the first person in line at a local Telstra store to nab the updated iPad. The tablet was quickly dismantled, however, thanks to some heat, guitar picks, and a plastic opening tool.

After lifting the 9.7-inch display, iFixit found that the model number on the LCD "leads us to believe this is a Samsung LCD."

Earlier this week there was some discussion about exactly which company was supplying Apple with the Retina Display for the new iPad. Wired and Bloomberg initially reported that Samsung was the sole supplier, but Reuters later said that LG was also making the touch-screen panels.

Analyst firm iSuppli then released a statement that said Apple likely has three sources for its displays - Samsung, LG, and Sharp - but said it believes "the volume shipments of the new iPad display are currently coming from Samsung."

In the model purchased by iFixit, at least, it appears the winner is Samsung. When the A5X processor was finally revealed, it too was also manufactured by Samsung, iFixit found.

"There isn't much difference between the old and new version of the A5: an 'x' in the name and an extra 0.2 GHz clock speed," iFixit said.

IFixit also found that "as is the case with most tablets, the iPad 3 is really just a giant battery."

"While the iPad 2 housed a formidable 25 watt-hour Li-ion battery, the iPad 3 has upped the ante to the tune of 42.5 watt-hours," iFixit said. "Its 3.7 volts and estimated 10 hours of use (9 with cellular data network) are comparable to that of the iPad 2, but we assume the extra 17.5 watt-hours are put to good use powering the extra RAM and greatly improved GPU." For more, see iFixit's complete teardown.