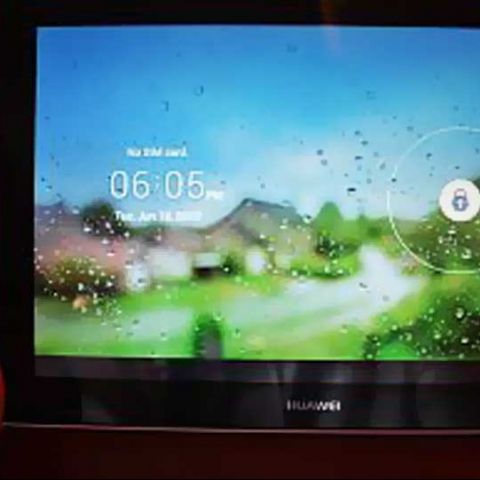 Today, Huawei showed off the MediaPad 10 Link tablet. The device runs on Android 4.1 Jelly Bean and is priced at Rs. 24,990.

Even though the Huawei Ascend Mate was the showstopper at yesterday’s press conference, the company also had a 10.1-inch tablet out on display. Christened the Huawei MediaPad 10 Link, the tablet runs on Android 4.1 Jelly Bean and has the same Emotion UI skin that we saw on the Ascend Mate.

The Huawei MediaPad 10 Link has a 10.1-inch IPS LCD display with a 1280x800 pixel resolution. It has a 1.2GHz quad-core processor, 1GB RAM and 8/16GB built-in storage expandable to 32GB via a microSD card. The rear of the tablet houses a 3MP camera and the front has a VGA video-calling camera. A 6,600mAh battery powers the entire package. The tablet also boasts of Dolby Surround Sound, dual speakers, a 3.5mm headphone jack and the ability to house a SIM card.

We spent a short while with the Huawei MediaPad 10 Link tablet at the launch event and here is what we felt about it. In the indoor conditions, where we played with the tablet, the display looked quite good. Sure, the resolution could have been better, but what was on offer wasn’t bad by any means. We played Riptide and some videos on the tablet and the representation onscreen was quite good. The reproduction of colours in the video was vibrant and the game ran quite smoothly. A special mention needs to be made for the speakers. They were audible in a hall full of people and that is a good thing. There are two speakers on the back of the tablet giving you a stereo effect.

Coming to the design and build of the Huawei MediaPad 10 Link, we felt it was quite slim, measuring in at 9.9mm in thickness, relatively lightweight, weighing in at a mere 640 grams. It has a dual-tone colour at the back, silver and white, with a metal and plastic finish. The rear also has the camera without a flash. The lock screen interface gives you access to either unlocking the device, accessing the camera or the gallery. Just like the Ascend Mate, the Huawei MediaPad 10 Link doesn’t have an apps list. All the apps are housed on the home screen. The rest of the interface of the tablet is fairly standard Android.

The Huawei MediaPad 10 Link has the power button and the volume rocker on the right and the headphones jack and the microUSB port on the left. The top of the device has a flap below, which rests the microSD card slot and the SIM card slot.

Stay tuned for a complete review of the Huawei MediaPad 10 Link, which is expected soon in the Digit Labs for testing.