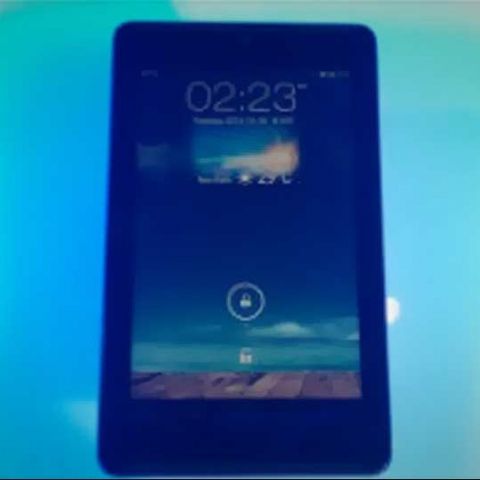 Asus today showed off the Transformer Book T100 running on Windows 8 and the Asus FonePad 7 Android powered tablet. Here are our first impressions of the devices.

Asus today launched two devices – the Asus Transformer Book T100 priced at Rs. 34,099 and the Asus FonePad 7 priced at Rs. 17,499. Both the devices will be available to consumers in November.

In its look and feel, the Asus FonePad is very similar to its predecessor. The FonePad we reviewed earlier had a metallic finish where as the one I saw today at the event has a plastic finish. The rear has the 5MP camera but there is no LED flash to accompany it. The tablet runs on Android 4.2 Jelly Bean and Asus has its own UI overlaying the device. There are a lot of features on the FonePad, which we saw on the previous iteration of the device. The handiest of these is the ability to run a bunch of apps in a small window on the display. You could be browsing the Internet on the tablet and have the dictionary along with the calculator open. There are a number of apps that you can use on the tablet in this manner. A button in the bottom left corner of the display brings up the list of apps that can work in a small window on the display.

The tablet has two speakers (at the top and bottom when held in portrait mode). We didn’t get a chance to test them at the event but the fact that stereo speakers are present means that the multimedia experience on the device will be good.

The FonePad tablet boasts of the ability to make calls as well. There is a SIM card slot on the left of the tablet. The FonePad will compete directly with the Samsung Galaxy Tab 3 that we saw recently and we will bring you an in-depth comparison once we have the FonePad in for review.

Under the hood, the FonePad runs on the Intel Clover Trail Plus Z2560 dual-core processor clocked at 1.6GHz along with 1GB of RAM. At the event the performance of the device was quite smooth, but we will reserve our judgment for when we have the tablet in for review. We feel that using a 7-inch device, as a phone is a bit uncomfortable but the experience on the FonePad as a tablet was quite good. It is quite slim at 10.5mm in thickness and weighs 340 grams. Asus claims that the 3950mAh, non-removable polymer battery will last for 10hrs of tablet usage or 28hrs talk time. We will put this claim to the test.

Under the hood, the Intel Bay-trail T Z3740, Quad Core 1.33 GHz CPU powers the device coupled with 2GB of RAM. It has 32GB built-in storage expandable via a microSD card. Internationally, a 64GB built-in storage variant is available but that hasn’t been introduced in India. The tablet also has a microUSB port, HDMI out and headphones jack as a part of its connectivity options.

Starting with the touchscreen, it is very smooth to interact with and the viewing angles are good. It isn’t the lightest tablet at 550 grams and is 10.5mm in thickness. We watched a few videos, and interacted with a few of the apps that were pre-loaded on the device. In our interaction, it worked very well.

Moving on to the keyboard dock, it doesn’t have a battery backup of its own and that is a tad disappointing. It weighs 520 grams and 13.1mm in thickness. The spacing of the keys on the keyboard is good but the keys felt small and slightly cramped. There is also a trackpad on the device and that is really small. The dock also has one USB 3.0 port.

The hinge that connects the two is well built and we propped the tablet at different angles and it stuck there quite well.

At the launch event, the Asus Transformer Book T100 worked well. It has a good build, but the glossy top of the tablet is a fingerprint magnet. We would like to put the device through its paces before we comment on its final performance.