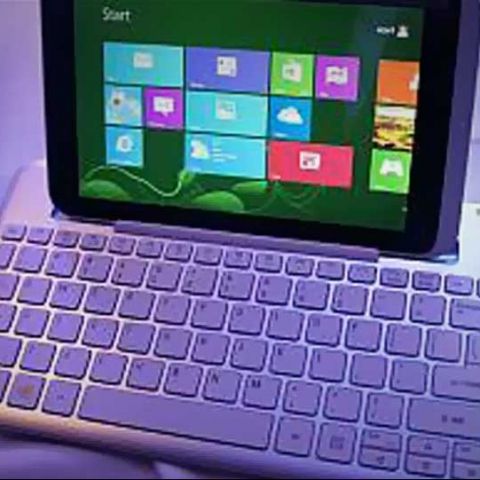 At the Acer event, we got to spend some time with the newly launched 8-inch Windows 8 tablet, the Iconia W3. Here are our first impressions of the device.

The Windows 8 (32-bit) based Iconia W3 features an 8.1-inch capacitive LCD display with a 1280x800 pixel resolution. Under the hood, the tablet has Intel's x86 architecture dual-core Intel Atom Z2760 processor clocked at 1.8GHz, with hyperthreading and onboard Intel HD graphics. It also has 2GB RAM. The W3 has a 2MP camera on both front and back.

The Acer Iconia W3 tablet comes in two storage variants – 32GB and 64GB. You can add an additional 32GB via microSD card. In terms of its connectivity options, the device has micro-HDMI out, USB 2.0 and Wi-Fi. It comes preloaded with Microsoft Office 2013 preinstalled. Acer claims that the device will last for 8 hours battery life.

There are two speakers at the base of the device, which is nice as we are used to seeing a single speaker at the rear of the device.

A sliding switch can be used to switch on the keyboard dock. The tablet simply fits into the rubberized hinge. There is no way of locking the tablet into the dock. This may be a slight disadvantage as once docked, you won’t be able to tilt it to suit your viewing angles. The dock also acts as a housing station for the W3 tablet. The tablet fits on the back of the tablet and the keyboard side is left exposed.