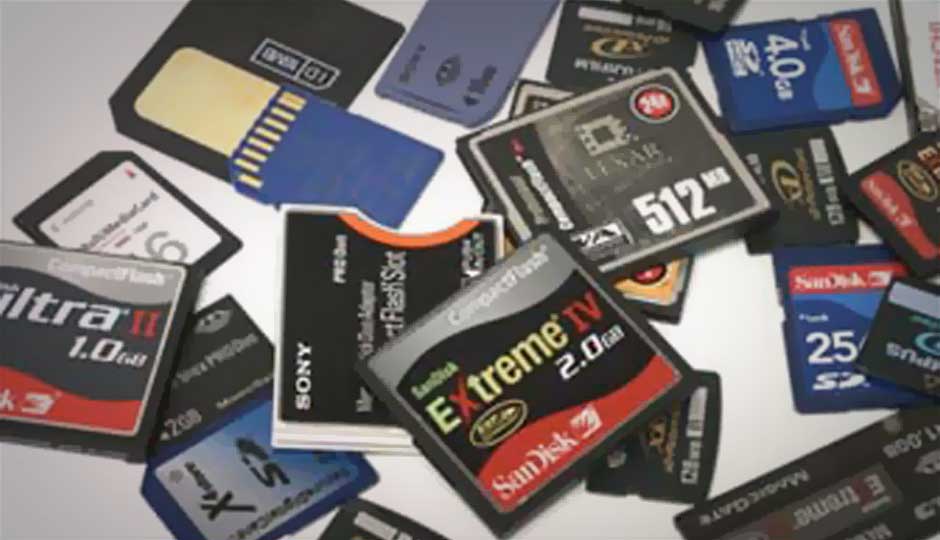 Many of us spend big bucks on getting ourselves a nice camera, the process that often involves haggling for discounts and freebies. One of the most common freebies thrown into the purchase is a memory card, most likely a blue coloured one with a modest 8GB capacity. Nothing brings more joy than knowing you “scored” an 8GB card for free with your purchase of that neat new camera, but what you don’t realize is that this little freebie might be keeping you from realizing the full potential of your camera. Sometimes, you may have to wait long times between shots, or suffer through a slow burst rate despite the camera being capable of faster. The worst is shooting a video in HD and finding that it skips every few seconds. What we’re going to do in this guide is break down the specifics of Memory cards so that you can pick the right one for your camera and avoid these experiences.

Types of Memory Cards
As things stand today, we have three primary types of memory cards in the market, each of which cater to a specific demographic.They are as follows:

MicroSD Card
This is a tiny memory card that is designed to work with cellphone. This type of memory card is extremely small and thin like a wafer, designed to be so keeping in mind the kind of space constraints that happen to be prevalent in any mobile phone.

Secure Digital (or SD cards)
The Secure Digital card standard has come a long way, becoming one of the most commonly used form factors in today’s times. Since its introduction in 1999, the standard has gone through various revisions, evolving from SD to SDHC and now to SDXC. The difference between the three only happens to be the maximum capacity supported, with SDHC expanding the maximum capacity supported to 32GB and then, the SDXC standard increasing the maximum supported capacity to 2TB. This type of card is used in almost any device that accepts a memory card, such as laptops, many tablet, but most importantly, cameras. Almost every point and shoot camera takes SD cards (save for a few exceptions)

Compact Flash (CF Cards)
The Compact Flash card was the most popular format at one point, especially when Canon and Nikon chose to adopt this format for their flagship cameras. The CF card standard was originally based on the Parallel ATA transfer protocol, with an alternative CFast standard proposing the switch to Serial ATA method. However, most CF cards today are still based on the PATA. CF cards today support storage capacities up to 256GB. CF cards have traditionally been used in DSLR cameras, but nowadays, this design can be found only in the pro DSLRs.

The Speed Factor
All memory cards have a specific speed with which they can be written on to. This is pretty much the single most important spec on the card, even more important than the capacity of the card. If you’ve just taken a photo and are wondering why the camera isn’t ready to take another photo, it’s probably because the camera is still busy transferring the image that was just shot to the memory card. Cards currently use two different rating systems, which we are going to demystify for you so that you know exactly what you are getting.

The X System
Often, you will come across memory cards with a “133x” or “200x” or even a “1000x” rating. These numbers are absolutely great to look at and whoever thought of this marketing strategy was nothing but a pure evil genius. The amount of cards that have been sold based on this ratings will simply nuke your brains, and chances are, you too have fallen prey to this ploy. Ever wonder what does the “x” stand for?
It comes from the old (or ancient, whatever) days of the CDROM days, where one “X” stood for 150KB/second” data transfer rate. That, dear friends, is what the “X” on your memory card stands for. So a card with a 300X write speed is essentially 300x150 = 43.5MB/second (rating multiplied by 150 which then is divided by 1024 to yield the MB/second rate). Compact Flash cards are still being rated using the X system.

The Class System
This rating system has now become the standard for all microSD and SD cards in the market. It’s a little number imprinted on your SD or microSD card surrounded by a neat little circle. This number specifies the minimum write speed it must support, meaning that if it says Class 10, chances are it supports just that bare minimum, unless the card specifically says the maximum write speed.
The classes are rated as Class 2, 4, 6 and 10, but there is a new standard called UHS-1 (Ultra High Speed 1). The UHS-1 standard doubles the clock speed available to the Class 10 memory cards, allowing them to achieve write speeds of up to roughly 100 MB/second.

The Right Card for You
Now that you know about the card speeds, just popping the fastest available card into your camera will not solve all your problems. Depending on the resolution of your camera, you could get a file anywhere between 1 and 15MB (assuming you are shooting at full quality JPG). In case you shoot raw, the size will increase by a factor of 1.5 (roughly).

Let’s say you have a camera that shoots JPG files at 20 megapixels, resulting in files that will be roughly 6-8 megabytes in size. This means that your memory card should have a minimum write speed of 6MB/second, if needs to be ready within a second to shoot again. Even this lag is slow, so most cameras have what is called a buffer, where they can store 5-10 images as they are written to the memory card so that your shooting doesn’t slow down. Ideally, purchase a memory card which has the write-speed that is higher than the individual file size generated by your camera, whether you shoot RAW or JPG. The equation changes slightly the minute video gets involved, so we are going to simply outline the best card for you using the most common scenarios.

For Cellpone Users
For such users, a class 10 card should be more than enough, given that the video recorded by most cellphones has a bit rate of less than 10MB/s. If you have a high end smartphone and would be doing a lot of gaming/multimedia related operations, then opt for the faster class 10 UHS-1 cards with a minimum 30MB/s write speed.

For Those Using a Point and Shoot Camera
If your point and shoot camera has a megapixel count of below 15 megapixels and shoots 720p video, then you can easily get away with a Class 10 card with a rating of 30MB/second. However, if you have one of the newer cameras with a higher megapixel count (20 or so) and shoot full HD video, you might want to get a card that’s capable of handling up to 45MB/second write speeds. The cards which support up to 45MB/second write speeds will also work well with the newer advanced point and shoot cameras that shoot photos in RAW and video in a higher bit-rate.

For the Tablet User
If you are using a tablet and a memory card is how you're expanding its memory, then you most definitely need something fast. A card with a minimum write speed of 45 MB/seconds is an absolute must, not only to save on copy-paste times, but also to ensure that you can access your multimedia quickly. A card of this write speed also ensures that when playing back HD movies, you wont experience any frame skipping.

For the DSLR User
If you are using a DSLR, chances are you’ve shelled out a lot of good money for your gear. Don’t skimp out on spending on a nice memory card that can manage 95MB/second of write speed. These cards are generally a little pricey, especially if you look at the 8GB or 16GB versions (larger capacities are even more expensive of course). This will not only help you achieve the maximum burst rate on your DSLR, but also manage to record your HD video at the highest bitrate without losing any frames. To give you an example, the Nikon D4 does 12 frames per second and these cards can chew up the RAW files without any issues. Each RAW file from the D4 is roughly 30 MB in size, so that’s 360MB of data being generated per second and our card which is rated at 95MB/second had no problem keeping the camera buffer from filling up. If you are using an SDXC card, then you shouldn’t have to look beyond the maximum write speed, but the case of Compact Flash cards is slightly different.

In order to facilitate higher transfer speeds and higher storage capacities, the CompactFlash standard (currently at version 6.0) has been combined with the Ultra Direct Memory Access (UDMA) interface, which is currently at Version 7.0. When looking for the right CF card for your DSLR, first find out what UDMA standard it is compliant with, and then purchase a card with that rating. UDMA and CF standards are backwards compatible, but in a camera that supports, for example, UDMA 6, a UDMA 7 card might not work at maximum bandwidth. You can generally find the UDMA compliance in the spec-sheet of the camera.

Closing Thoughts
It is absolutely essential to invest some good money in getting a high quality card. It is not just about the speeds, but also about the brand. If you think a high speed card from an unknown brand is a good bet, then you could be very wrong and price to pay for such a mistake would be your precious memories. Today, there are several brands making great quality memory cards such as Sandisk, Transcend, Lexar, Sony and even Samsung. They all make memory cards that covers every speed range and capacity and we highly recommend you buy from one of them.