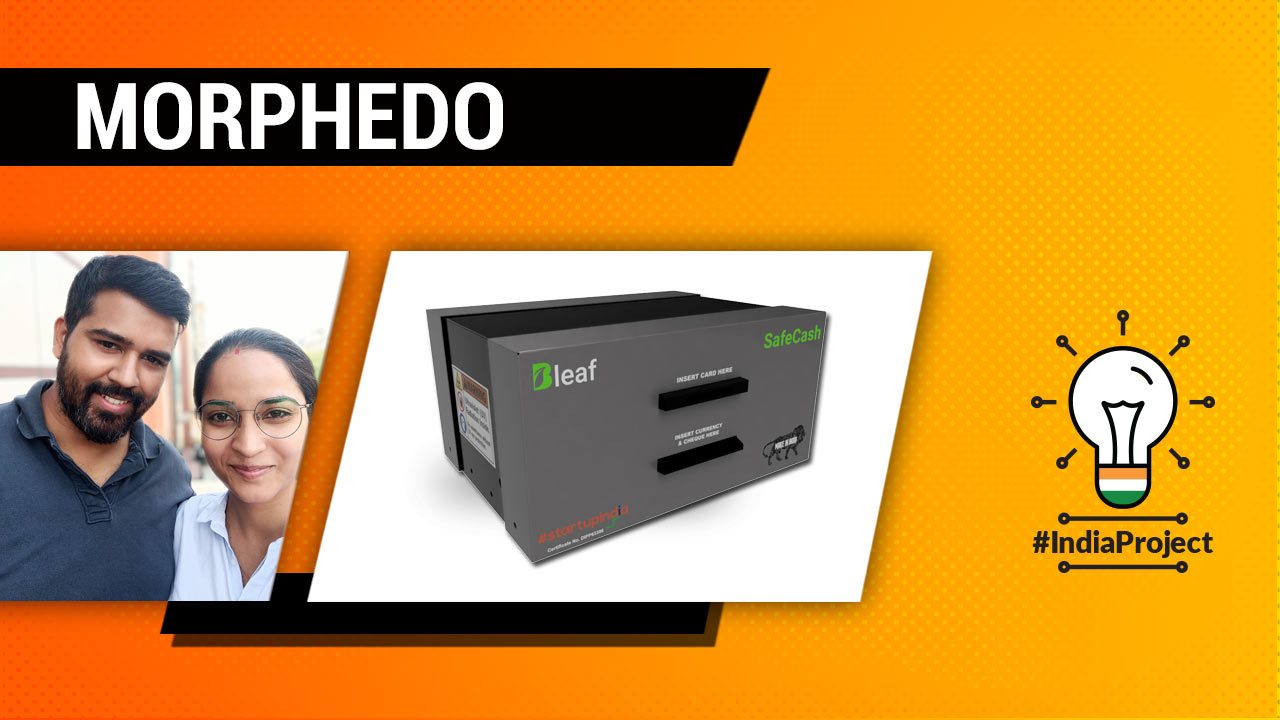 Morphedo is a product engineering company that caters to research, design and manufacturing requirements of businesses and helps engineer smart electronics and electromechanical products. Morphedo was part of the first Cohort in the Nexus Incubator program. The company works closely with R&D and product development teams of startups, corporates, and even the government to provide them with assistance to build better products. The company also works on building innovative AI and IoT-powered technological solutions including – a smart delivery box for no-contact delivery of online purchases, Swach ATM (for their client EcoMaxGo) – an IoT enabled Reverse Vending Machine that collects plastic and glass bottles and tin cans and, in turn, rewards users with Wallet cash, Safe Cash (for their client Bleaf) – a currency and debit/credit card sterilising apparatus, and others. The company also dabbles largely in 3D printing high-resolution engineering prototypes and functional components for B2B clients.

Morphedo leverages industrial blue light 3D scanners that allow them to reverse engineer a product or part. This 3D scanning process generates point cloud data which is then converted into a 3D CAD model for prototyping and even mass production. The company is currently working with DRDO, Ministry of Defense on a two-year project for research, design, development, testing and manufacturing of a Total Air Temperature Probe (TATP) for Light Combat Aircrafts (LCAs). The TATP is a platinum sensor-based unit, the output of which is critical to Flight control systems. This project aims to indigenise the development of TATP. The startup is also working with the Indian Navy in collaboration with IIT Delhi, CARE Unit to design an enclosure for acoustic sensors that are placed 15 meters under sea level to capture acoustic signals or vibrations within the sea. Additionally, the company also has projects with Doordarshan, has worked with CDAC (Centre for Development of Advanced Computing), among others. We spoke to Manya Jha and Sushil Baranwal, Founders, Morphedo Technologies to learn more about their startup.

Digit: What are the range of parts or products that Morphedo can print? Are these specifically B2B or B2C as well?

Morphedo: Our 3d printing work is mainly focused on engineering components (plastic) for B2B clients. Range of products that we 3d print for our clients are:

Digit: How do you use point cloud data from 3D printers to reverse engineer products?

Morphedo: We are using industrial blue light 3D scanners for reverse engineering a product or a part. This 3d scanning process generates point cloud data which we then convert into a 3D CAD model for prototyping or mass production.

Digit: What are the stages of product development that you go through? Is 3D printing only used for your prototyping stages?

Following are the stages of product development that we go through: Technical Feasibility / Research, Ideation, Design, Prototype, Batch Manufacturing, Mass manufacturing. Our clients associate with us at different stages. Majority of our clients are choosing to rely on our services from ideation to scale.

Yes, currently we use 3d printing only for our prototyping and batch production stages.

Digit: Please elaborate on the projects that the company has worked on for the government of India or Indian armed services.

This is a 2 year project granted to us in July 2020 through a rigorous 3 level evaluation of duration 9+ months as a part of Technology Development (TDF) Scheme. Activities involved in this project are: research, design, development, testing and manufacturing of a Total Air Temperature Probe (TATP) for Light Combat Aircrafts (LCAs). TATP is a platinum sensor based unit, the output of which is critical to Flight control system.

This project aims to indigenise development of a Total Air Temperature Probe (TATP) which is a Line Replaceable Unit (LRU) in a Light Combat Aircraft. LRUs are modular components which are designed to be replaced quickly at an operating location to improve maintenance operation. The subject LRU to be developed will be used in all LCAs and its variants viz. LCA Navy Mk1/Mk2, LCA Mk1A, LCA AF Mk2 (MWF).

The need to indigenize LRUs of LCA came into light with the development of first indigenously developed Light Combat Aircraft ‘HAL Tejas’ designed by the Aeronautical Development Agency (ADA) in collaboration with Aircraft Research and Design Centre (ARDC) of Hindustan Aeronautics Limited (HAL) for the Indian Air Force and Indian Navy. This aircraft consists of 358 LRU’s out of which 53% of the total LRU’s are indigenously developed within India and to reduce the import of remaining 47% of the LRU’s, ADA initiated an indigenization programme for indigenization of the imported LRU’s belonging to various critical systems of aircraft viz. Avionics System, Environmental Control System, Electrical System, Flight Control System, Hydraulic System, etc. Amongst these TATP comes under the Flight Control System of the aircraft.

Project: Design and fabrication of an enclosure for Acoustic sensor which will be placed 15 meter under sea water to capture acoustic signals or vibrations under the sea water. The activities executed by Morphedo in this project include: Design research for enclosure conceptualisation, Development of industrial design, 3D Printing of prototypes (SLS), Design iteration after testing prototypes, Final units will be 3d printed in Titanium material.

Digit: IoT seems to be a massive point of focus for Morphedo. What are some interesting projects that the company is working on in this domain?

Morphedo: Following is the brief of a few of the current IoT and electromechanical devices that we are working on:

1) Product: Smart Delivery Box; a smart, secure space to get parcels delivered to your doorstep at any time. Making no-contact delivery of  your online purchases a reality.

A few more electromechanical equipment, out of R&D:

6) Product:  SafeCash, a currency and debit/credit card real time sterilizing apparatus for bacteria and virus free cash or card transactions at a POS.
Client: Bleaf Technologies Pvt. Ltd.
Morphedo’s Role: Product Development & Manufacturing Partner
Function: It accepts cash or card from their designated slots present at front of the apparatus and keeps it inside for less than 10 seconds to sterilize the cash or card and then sends it out from the out slot present at the back of the apparatus. 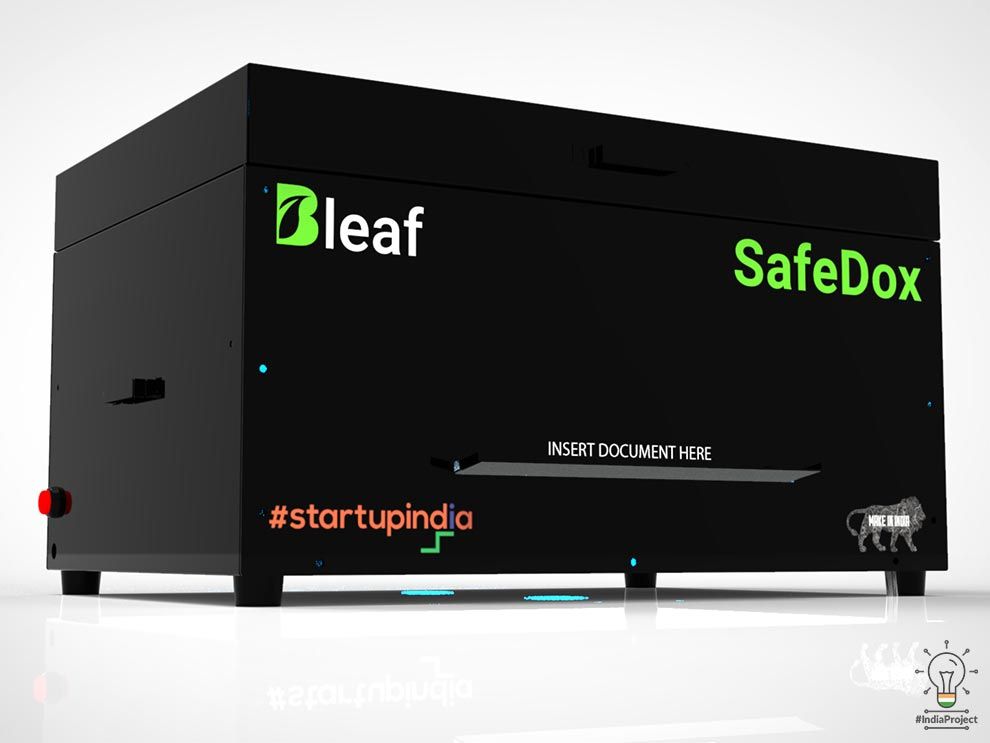 7) Product: SafeDox, a real time document sterilizing apparatus for keeping documents like A4 size papers and legal documents germ free during its exchange in an office.

Digit: How does distribution and mass-production work, if in case, the order comes from a different part of the country?

Morphedo: We have consortium/association partners within Delhi-NCR region for mass production of engineering focused plastic, metal, rubber, and sheet metal components and for PCB manufacturing. We locally mass produce these components and ship directly to the customer through our logistics partners anywhere in India. We have also exported mass produced components to the United States.

Five such IoT and Electromechanical projects are in pipeline where we are setting up assembly lines for mass production.

Nexus Incubator is also now accepting applications for its 11th Virtual Cohort. Indian startups that are interested can check out this link. To discover other innovative Indian startups, visit this page.